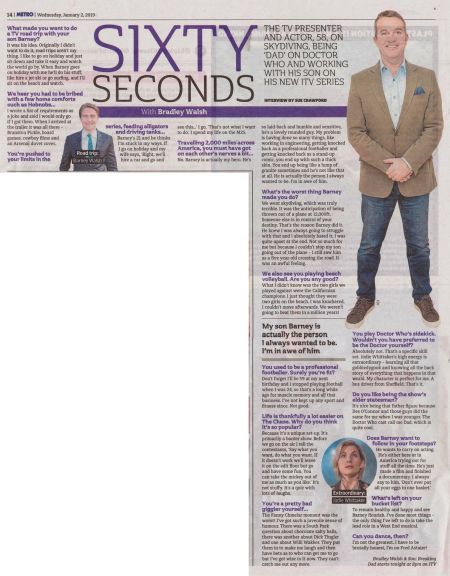 THE TV PRESENTER AND ACTOR, 58, ON SKYDIVING, BEING 'DAD' ON DOCTOR WHO AND WORKING WITH HIS SON ON HIS NEW ITV SERIES

What made you want to do a TV road trip with your son Barney?

It was his idea. Originally! didn't want to do it, road trips aren't my thing. 1 like to go on holiday and just sit down and take it easy and watch the world go by. When Barney goes on holiday with me he'll do his stuff, like hire a jet-ski or go surfing, and I'll sit on the beach and watch.

We hear you had to be bribed with a few home comforts such as Hobnobs...

I wrote a list of requirements as a joke and said I would only go if 1 got them. When I arrived at the trailer it was all there - Branston Pickle, board games, cowboy films and an Arsenal duvet cover.

You're pushed to your limits in the series, feeding alligators and driving tanks...

Travelling 2,000 miles across America, you must have got on each other's nerves a bit...

No. Barney is actually my hero. He's so laid-back and humble and sensitive, he's a lovely rounded guy. My problem is having done so many things, like working in engineering, getting knocked back as a professional footballer and getting knocked back as a stand-up comic, you end up with such a thick skin. You end up being like a lump of granite sometimes and he's not like that at all. He is actually the person I always wanted to be. I'm in awe of him.

What's the worst thing Barney made you do?

We went skydiving, which was truly terrible. It was the anticipation of being thrown out of a plane at 12,000ft. Someone else is in control of your destiny. That's the reason Barney did it. He knew I was always going to struggle with that and 1 absolutely hated it. I was quite upset at the end. Not so much for me but because I couldn't stop my son going out of the plane - I still saw him as a five year-old crossing the road. It was an awful feeling.

We also see you playing beach volleyball. Are you any good?

What I didn't know was the two girls we played against were the Californian champions. I just thought they were two girls on the beach. I was knackered, I couldn't move afterwards. We weren't going to beat them in a million years!

You used to be a professional footballer. Surely you're fit?

Don't forget I'll be 59 at my next birthday and I stopped playing football when I was 24, so that's a long while ago for muscle memory and all that business. I've not kept up any sport and fitness since. Not good.

Life is thankfully a lot easier on The Chase. Why do you think it's so popular?

Because it's a unique set-up. It's primarily a banter show. Before we go on the air I tell the contestants, 'Say what you want, do what you want. If it doesn't work we'll leave it on the edit floor but go and have some fun. You can take the mickey out of me as much as you like: It's not stuffy. It's a quiz with lots of laughs.

You're a pretty bad giggler yourself...

The Fanny Chmelar moment was the worst! I've got such a juvenile sense of humour. There was a South Park question about chocolate salty balls, there was another about Dick Tingler and one about Willi Wakker. They put them in to make me laugh and then have bets as to who can get me to go but I've got wise to it now. They can't catch me out any more.

You play Doctor Who's sidekick. Wouldn't you have preferred to be the Doctor yourself?

Absolutely not. That's a specific skill set. Jodie Whittaker's high energy is extraordinary - learning all that gobbledygook and knowing all the back story of everything that happens in that world. My character is perfect for me. A bus driver from Sheffield. That's it.

It's nice being that father figure because Des O'Connor and those guys did the same for me when I was younger. The Doctor Who cast call me Dad, which is quite cool.

He wants to carry on acting. He's either here or in America trying out for stuff all the time. He's just made a film and finished a documentary. I always say to him, 'Don't ever put all your eggs in one basket.'

To remain healthy and happy and see Barney flourish. I've done most things the only thing I've left to do is take the lead role in a West End musical.

Can you dance, then?

I'm not the greatest. I have to be brutally honest, I'm no Fred Astaire!