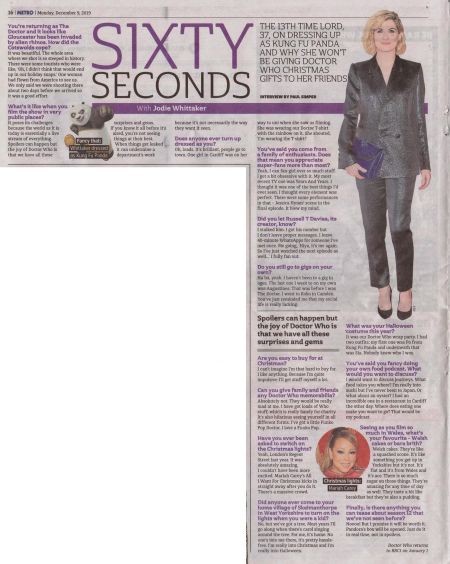 THE 13TH TIME LORD, 37, ON DRESSING UP AS KUNG FU PANDA AND WHY SHE WON'T BE GIVING DOCTOR WHO CHRISTIV1AS GIFTS TO HER FRIENDS

You're returning as The Doctor and it looks like Gloucester has been invaded by alien rhinos. How did the Cotswolds cope?

It was beautiful. The whole area where we shot is so steeped in history. There were some tourists who were like, 'Oh, I didn't think that would end up in our holiday snaps.' One woman had flown from America to see us. We only said we were shooting there about two days before we arrived so it was a good effort.

What's it like when you film the show in very public places?

It poses its challenges because the world as it is today is essentially a live stream of everything. Spoilers can happen but the joy of Doctor Who is that we have all these surprises and gems. If you know it all before it's aired, you're not seeing things at their best. When things get leaked it can undermine a department's work because it's not necessarily the way they want it seen.

Does anyone ever turn up dressed as you?

Oh, loads. It's brilliant, people go to town. One girl in Cardiff was on her way to uni when she saw us filming. She was wearing our Doctor T-shirt with the rainbow on it. She shouted, 'I'm wearing the T-shirt!'

You've said you come from a family of enthusiasts. Does that mean you appreciate super-fans more than most? Yeah, I can fan-girl over so much stuff. I get a bit obsessive with it. My most recent TV one was Years And Years. I thought it was one of the best things I'd ever seen. I thought every element was perfect. There were some performances in that - Jessica Hynes' scene in the final episode. It blew my mind.

Did you let Russell T Davies, its creator, know?

I stalked him. I got his number but I don't leave proper messages. I leave 40-minute WhatsApps for someone I've met once. Me going, 'Hiya, it's me again. So I've just watched the next episode as well...' I fully fan out.

Do you still go to gigs on your own?

Ha ha, yeah. I haven't been to a gig in ages. The last one I went to on my own was Augustines. That was before I was The Doctor. I went to Koko in Camden. You've just reminded me that my social life is really lacking.

Are you easy to buy for at Christmas?

I can't imagine I'm that hard to buy for. I like anything. Because I'm quite impulsive I'll get stuff myself a lot.

Can you give family and friends any Doctor Who memorabilia?

Absolutely not. They would be really mad at me. I have got loads of Who stuff, which is really handy for charity. It's also hilarious seeing yourself in all different forms. I've got a little Funko Pop Doctor. I love a Funko Pop.

Have you ever been asked to switch on the Christmas lights?

Yeah, London's Regent Street last year. It was absolutely amazing. I couldn't have been more excited. Mariah Carey's All I Want For Christmas kicks in straight away after you do it. There's a massive crowd.

Did anyone ever come to your home village of Skelmanthorpe in West Yorkshire to turn on the lights when you were a kid?

No, but we've got a tree. Most years I'll go along when there's carol singing around the tree. For me, it's home. No one's into me there, it's pretty hassle-free. I'm really into Christmas and I'm really into Halloween.

What was your Halloween costume this year?

It was our Doctor Who wrap party. I had two outfits: my first one was Po from Kung Fu Panda and underneath that was Sia. Nobody knew who I was.

You've said you fancy doing your own food podcast. What would you want to discuss?

I would want to discuss journeys. What food takes you where? I'm really into sushi but I've never been to Japan. Or what about an oyster? I had an incredible one in a restaurant in Cardiff the other day. Where does eating one make you want to go? That would be my podcast.

Seeing as you film so much in Wales, what's your favourite - Welsh cakes or bara brith?

Welsh cakes. They're like a squashed scone. It's like something you get up in Yorkshire but it's not. It's flat and it's from Wales and it's ace. There is so much sugar on those things. They're amazing for any time of day as well. They taste a bit like breakfast but they're also a pudding.

Finally, is there anything you can tease about season 12 that we've not seen before?

Noooo! But I promise it will be worth it. Pandora's box will be opened. Just do it in real time, not in spoilers.

Doctor Who returns to BBCI on January 1