Slip inside and scare the kids: Dr Who fans offered a ramshackle piece of TV history 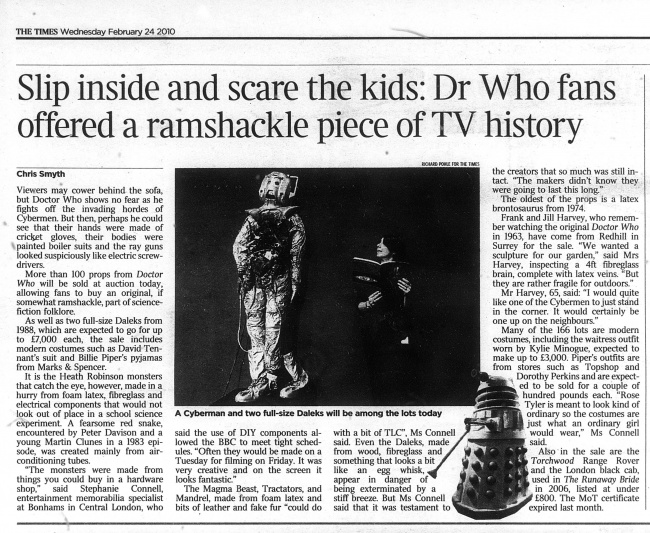 Viewers may cower behind the sofa, but Doctor Who shows no fear as he fights off the invading hordes of Cybermen. But then, perhaps he could see that their hands were made of cricket gloves, their bodies were painted boiler suits and the ray guns looked suspiciously like electric screwdrivers.

More than 100 props from Doctor Who will be sold at auction today, allowing fans to buy an original, if somewhat ramshackle, part of science-fiction folklore.

As well as two full-size Daleks from 1988, which are expected to go for up to £7,000 each, the sale includes modern costumes such as David Tennant's suit and Billie Piper's pyjamas from Marks & Spencer.

It is the Heath Robinson monsters that catch the eye, however, made in a hurry from foam latex, fibreglass and electrical components that would not look out of place in a school science experiment. A fearsome red snake, encountered by Peter Davison and a young Martin Clunes in a 1983 episode, was created mainly from air-conditioning tubes.

"The monsters were made from things you could buy in a hardware shop," said Stephanie Connell, entertainment memorabilia specialist at Bonhams in Central London, who said the use of DIY components allowed the BBC to meet tight schedules. "Often they would be made on a Tuesday for filming on Friday. It was very creative and on the screen it looks fantastic."

The Magma Beast, Tractators, and Mandrel, made from foam latex and bits of leather and fake fur "could do with a bit of TLC", Ms Connell said. Even the Daleks, made from wood, fibreglass and something that looks a bit like an egg whisk, appear in danger of being exterminated by a stiff breeze. But Ms Connell said that it was testament to the creators that so much was still intact. "The makers didn't know they were going to last this long."

The oldest of the props is a latex brontosaurus from 1974.

Frank and Jill Harvey, who remember watching the original Doctor Who in 1963, have come from Redhill in Surrey for the sale. "We wanted a sculpture for our garden," said Mrs Harvey, inspecting a 4ft fibreglass brain, complete with latex veins. "But they are rather fragile for outdoors."

Mr Harvey, 65, said: "I would quite like one of the Cybermen to just stand in the corner. It would certainly be one up on the neighbours."

Many of the 166 lots are modern costumes, including the waitress outfit worn by Kylie Minogue, expected to make up to £3,000. Piper's outfits are from stores such as Topshop and Dorothy Perkins and are expected to be sold for a couple of hundred pounds each. "Rose Tyler is meant to look kind of ordinary so the costumes are just what an ordinary girl would wear," Ms Connell said.

Also in the sale are the Torchwood Range Rover and the London black cab, used in The Runaway Bride in 2006, listed at under £800. The MoT certificate expired last month.

Caption: A Cyberman and two full-size Daleks will be among the lots today