So, who is this Matt Smith bloke? 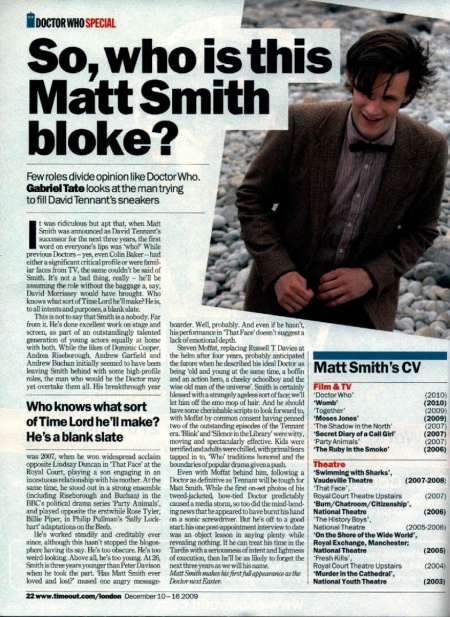 It was ridiculous but apt that, when Matt Smith was announced as David Tennant's successor for the next three years, the first word on everyone's lips was 'who?' While previous Doctors - yes, even Colin Baker - had either a significant critical profile or were familiar faces from TV, the same couldn't be said of Smith. It's not a bad thing, really - he'll be assuming the role without the baggage a, say, David Morrissey would have brought. Who knows what sort of Time Lord he'll make? He is, to all intents and purposes, a blank slate.

This is not to say that Smith is a nobody. Far from it. He's done excellent work on stage and screen, as part of an outstandingly talented generation of young actors equally at home with both. While the likes of Dominic Cooper, Andrea Riseborough, Andrew Garfield and Andrew Buchan initially seemed to have been leaving Smith behind with some high-profile roles, the man who would be the Doctor may yet overtake them all. His breakthrough year was 2007, when he won widespread acclaim opposite Lindsay Duncan in 'That Face' at the Royal Court, playing a son engaging in an incestuous relationship with his mother. At the same time, he stood out in a strong ensemble (including Riseborough and Buchan) in the BBC's political drama series 'Party Animals', and played opposite the erstwhile Rose Tyler, Billie Piper, in Philip Pullman's 'Sally Lockhart' adaptations on the Beeb.

He's worked steadily and creditably ever since, although this hasn't stopped the blogosphere having its say. He's too obscure. He's too weird-looking. Above all, he's too young. At 26, Smith is three years younger than Peter Davison when he took the part. 'Has Matt Smith ever loved and lost?' mused one angry messageboarder. Well, probably. And even if he hasn't, his performance in 'That Face' doesn't suggest a lack of emotional depth.

Steven Moffat, replacing Russell T Davies at the helm after four years, probably anticipated the furore when he described his ideal Doctor as being 'old and young at the same time, a boffin and an action hero, a cheeky schoolboy and the wise old man of the universe'. Smith is certainly blessed with a strangely ageless sort of face; we'll let him off the emo mop of hair. And he should have some cherishable scripts to look forward to, with Moffat by common consent having penned two of the outstanding episodes of the Tennant era. 'Blink' and 'Silence in the Library' were witty, moving and spectacularly effective. Kids were terrified and adults were chilled, with primal fears tapped in to, 'Who traditions honored and the boundaries of popular drama given a push.

Even with Moffat behind him, following a Doctor as definitive as Tennant will be tough for Matt Smith. While the first on-set photos of his tweed-jacketed, bow-tied Doctor predictably caused a media storm, so too did the mind-bending news that he appeared to have burnt his hand on a sonic screwdriver. But he's off to a good start his one post-appointment interview to date was an object lesson in saying plenty while revealing nothing. If he can treat his time in the Tardis with a seriousness of intent and lightness of execution, then he'll be as likely to forget the next three years as we will his name.

Matt Smith makes his first full appearance as the Doctor next Easter.

'On the Shore of the Wide World',

'Murder in the Cathedral',

'The Shadow in the North'

'Secret Diary of a Call Girl'

'The Ruby in the Smoke'