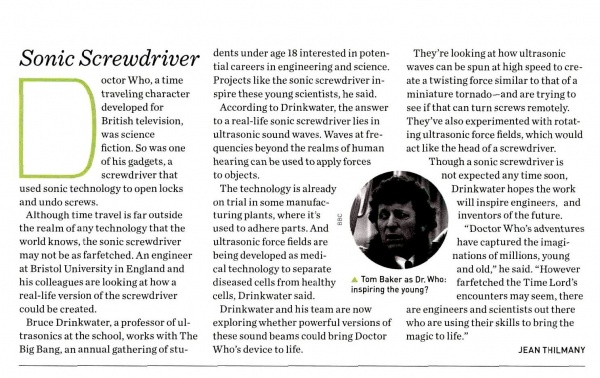 Doctor Who, a time traveling character developed for British television, was science fiction. So was one of his gadgets, a screwdriver that used sonic technology to open locks and undo screws.

Although time travel is far outside the realm of any technology that the world knows, the sonic screwdriver may not be as farfetched. An engineer at Bristol University in England and his colleagues are looking at how a real-life version of the screwdriver could be created.

Bruce Drinkwater, a professor of ultrasonics at the school, works with The Big Bang, an annual gathering of students under age 18 interested in potential careers in engineering and science. Projects like the sonic screwdriver inspire these young scientists, he said. According to Drinkwater, the answer to a real-life sonic screwdriver lies in ultrasonic sound waves. Waves at frequencies beyond the realms of human hearing can be used to apply forces to objects.

The technology is already on trial in some manufacturing plants, where it's used to adhere parts. And ultrasonic force fields are being developed as medical technology to separate diseased cells from healthy cells, Drinkwater said.

Drinkwater and his team are now exploring whether powerful versions of these sound beams could bring Doctor Who's device to life.

They're looking at how ultrasonic waves can be spun at high speed to create a twisting force similar to that of a miniature tornado—and are trying to see if that can turn screws remotely. They've also experimented with rotating ultrasonic force fields, which would act like the head of a screwdriver.

Though a sonic screwdriver is not expected any time soon, Drinkwater hopes the work will inspire engineers, and inventors of the future. "Doctor Who's adventures have captured the imaginations of millions, young and old," he said. "However farfetched the Time Lord's encounters may seem, there are engineers and scientists out there who are using their skills to bring the magic to life."

Tom Baker as Dr. Who: inspiring the young?