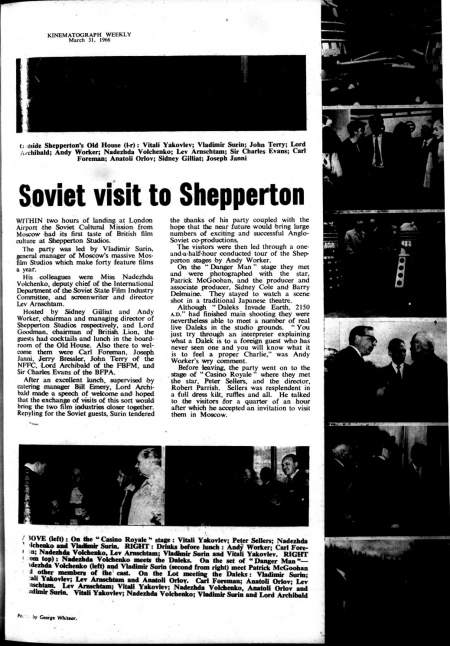 WITHIN two hours of landing at London Airport the Soviet Cultural Mission from Moscow had its first taste of British film culture at Shepperton Studios.

His colleagues were Miss Nadezhda Volchenko, deputy chief of the International Department of the Soviet State Film Industry Committee, and screenwriter and director Lev Arnschtam.

Hosted by Sidney Giliat and Andy Worker, chairman and managing director of Shepperton Studios respectively, and Lord Goodman, chairman of British. Lion, the guests had cocktails and lunch in the boardroom of the Old House. Also there to welcome them were Carl Foreman, Joseph lanai. Jerry Bressler, John Terry of the NFFC, Lord Archibald of the FBFM, and Sir Charles Evans of the BFPA.

After an excellent lunch, supervised by catering manager Bill Emery, Lord Archibald made a speech of welcome and hoped that the exchange of visits of this sort would bring the two film industries closer together. Repyling for the Soviet guests, Surin tendered the thanks of his party coupled with the hope that the near future would bring large numbers of exciting and successful Anglo-Soviet co-productions.

The visitors were then led through a one-and-a-half-hour conducted tour of the Shepperton stages by Andy Worker.

On the "Danger Ma " stage they met and were photographed with the star, Patrick McGoohan, and the producer and associate producer, Sidney Cole and Barry Delmaine. They stayed to watch a scene shot in a traditional Japanese theatre.

Although "Daleks Invade Earth, 2150 A.D." had finished main shooting they were nevertheless able to meet a number of real live Daleks in the studio grounds. " You just try through an interpreter explaining what a Dalek is to a foreign guest who has never seen one and you will know what it is to feel a proper Charlie," was Andy Worker's wry comment.

Before leaving, the party went on to the stage of "Casino Royale" where they met the star, Peter Sellers, and the director, Robert Parrish. Sellers was resplendent in a full dress kilt, ruffles and all. He talked to the visitors for a quarter of an hour after which he accepted an invitation to visit them in Moscow.