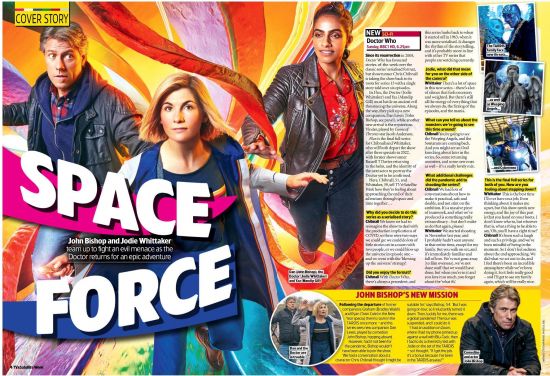 Since its resurrection in 2005, Doctor Who has favoured stories-of-the-week over the classic series' serialised format, but showrunner Chris Chibnall is taking the show back to its roots for series 13 with a single story told over six episodes.

In Flux, the Doctor (Jodie Whittaker) and Yaz (Mandip Gill) must battle an ancient evil threatening the universe. Along the way, they pick up a new companion, Dan Lewis (John Bishop, see panel), while another new arrival is the mysterious Vinder, played by Game of Thrones star Jacob Anderson.

Flux is the final full series for Chibnall and Whittaker, who will both depart the show after three specials in 2022, with former showrunner Russell T Davies returning to the helm, and the identity of the next actor to portray the Doctor yet to be confirmed.

Here, Chibnall, 51, and Whittaker, 39, tell TV&Satellite Week how they're feeling about approaching the end of their adventure through space and time together...

Why did you decide to do this series as a serialised story? Chibnal I We knew we had to reimagine the show to deal with the production implications of COVID, so there were two ways we could go: we could do lots of little stories set in a room with two people, or we could blow up the universe in episode one and we went with the 'blowing up the universe' strategy!

Did you enjoy the format?

Chibnall With Doctor Who, there's always a precedent, and this series harks back to when it started off in 1963, when it was more serialised. It changes the rhythm of the storytelling, and it's probably more in line with other TV series that people are watching currently.

Jodie, what did that mean for you on the other side of the camera?

Whittaker There's a lot of space in this new series - there's a lot of silence that feels necessary and weighted. But there's still all the energy of everything that we always do, the fizzing of the episodes, and the mania.

What can you tell us about the monsters we're going to see this time around?

Chibnall You're going to see the Weeping Angels, and the Sontarans are coming back. And you might see an Ood knocking about later in the series. So, some returning monsters, and some new ones as well - it's a really lovely mix.

What additional challenges did the pandemic add to shooting the series?

Chibnall We had lots of conversations about how to make it practical, safe and doable, and not stint on the ambition. It's a massive piece of teamwork, and what we've produced is something really extraordinary - but don't make us do that again, please!

Whittaker We started shooting in November last year, and I probably hadn't seen anyone in that entire time, except for my family. But you walk on set, and it's immediately familiar and full of love. We've not gone away [to film overseas] , we've not done stuff that we would have done, but when you're in it and you love it so much, you forget about the 'what ifs.

This is the final full series for both of you. How are you feeling about stepping down?

Whittaker This is the best time I'll ever have on a job. Even thinking about it makes me upset, but this show needs new energy, and the joy of this part is that you hand on your boots. I don't know who to, but whoever that is, what a thing to be able to say, 'Oh, you'll have a right time!'

Chibnall It's been such a laugh and such a privilege, and we've been mindful of being in the moment. So I don't feel sadness about the end approaching. We did what we set out to do, and I feel there's been an incredible atmosphere while we've been doing it. So it feels really good - and I'll get to see my family again, which will be really nice.

Following the departure of former companions Graham (Bradley Walsh) and Ryan (Tosin Cole) in the New Year special, there's room in the TARDIS once more - and this series sees new companion Dan Lewis, played by comedian John Bishop, hopping aboard. However, had it not been for the pandemic, Bishop wouldn't have been able to join the show. 'We had a conversation about a character Chris Chibnall thought I might be suitable for,' says Bishop, 54. 'But I was going on tour, so I reluctantly turned it down. Then, luckily for me, there was a global pandemic! The tour was suspended, and I could do it.

'I had an audition on Zoom, where I had my phone pinned up against a wall with Blu-Tack, then I had to do a chemistry test with Jodie on the set of the TARDIS - so I thought, "If I get the job, it's a bonus because I've been in the TARDIS anyway!'

Caption: Dan and the Doctor are in trouble