Standing up for Dr Who 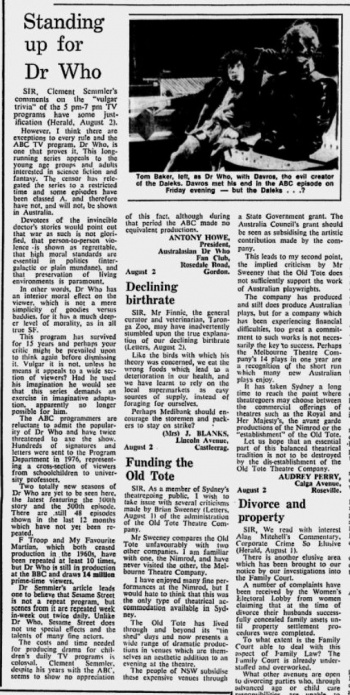 SIR, Clement Semmler's comments on the "vulgar trivia" of the 5 pm-7 pm TV programs have some justification (Herald, August 2).

However. I think there are exceptions to every rule and the ABC TV program, Dr Who, is one that proves it. This long-running series appeals to the young age groups and adults interested in science fiction and fantasy. The censor has relegated the series to a restricted time and some episodes have been classed A, and therefore have not, and will not, be shown in Australia.

Devotees of the invincible doctor's stories would point out that war as such is not glorified, that person-to-person violence is shown as regrettable, that high moral standards are essential in politics (intergalactic or plain mundane), and that preservation of living environments is paramount.

In other words. Dr Who has an interior moral effect on the viewer, which is not a mere simplicity of goodies versus baddies, for it has a much deeper level of morality, as in all true SF.

This program has survived for 15 years and perhaps your critic might be prevailed upon to think again before dismissing it. Vulgar it is not, unless he means it appeals to a wide section of viewers? Had he used his imagination he would see that this series demands an exercise in imaginative adaptation, apparently no longer possible for him.

The ABC programmers are reluctant to admit the popularity of Dr Who and have twice threatened to axe the show. Hundreds of signatures and letters were sent to the Program Department in 1976, representing a cross-section Of streets from schoolchildren to university professors.

Two totally new seasons of Dr Who are yet to be seen here, the latest featuring the 100th story and the 500th episode. There are still 48 episodes shown in the last 12 months which have not yet been repeated.

F Troop and My Favourite Martian, which both ceased production in the 1960s, have been repeated at least 10 times, but Dr Who is still in production at the BBC and draws 14 million prime-time viewers.

Dr Semmler's article leads one to believe that Sesame Street is not a repeat program, but scenes from it are repeated week in-week out twice daily. Unlike Dr Who, Sesame Street does not use special effects and the talents of many fine actors.

The costs and time needed for producing drama for children's daily TV programs is colossal. Clement Semmler, despite his years with the ABC, seems to show no appreciation of this fact, although during that period the ABC made no equivalent productions.

Caption: Tom Baker, left, as Dr Who, with Davros, the evil creator of the Daleks. Davros met his end in the ABC episode on Friday evening — but the Daleks ...?