Stars in his eyes 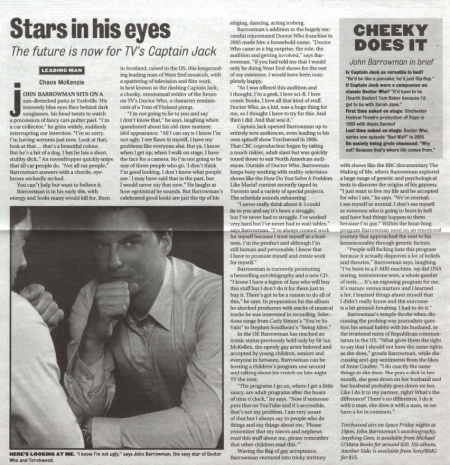 The future is now for TV's Captain Jack

JOHN BARROWMAN SITS ON A sun-drenched patio in Yorkville. His intensely blue eyes flare behind dark sunglasses, his head twists to watch a procession of fancy cars putter past. 'I'm a car collector,' he grins widely, suddenly interrupting our interview. 'I'm so sorry. I'm having wetness just now. Look at that, look at that... that's a beautiful colour. But he's a bit of a dog. I bet he has a short, stubby dick." An eavesdropper quickly snips that all car people do. "Not all car people," Barrowman answers with a chortle, eyebrows wickedly arched.

You can't help but want to believe it.

Barrowman is in his early 40s, with energy and looks many would kill for. Born in Scotland, raised in the US, this longstanding leading man of West End musicals, with a spattering of television and film work, is best known as the dashing Captain Jack, a cheeky, omnisexual soldier of the future on TV's Doctor Who, a character reminiscent of a Tom of Finland pinup.

'I'm not going to lie to you and say I don't know that," he says, laughing when questioned about his old-time matinee idol appearance. "All I can say is I know I'm not ugly. I see flaws in myself. I have my problems like everyone else. But ya, I know when I get up, when I walk on stage. I have the face for a camera. So I'm not going to be one of those people who go, 'I don't think I'm good looking. I don't know what people see.' I may have said that in the amt. but I would never say that now." He laughs at how egotistical he sounds. But Barrowman's celebrated good looks are just the tip of his singing, dancing, acting iceberg.

Barrowman's addition to the hugely successful rejuvenated Doctor Who franchise in 2005 made him a household name. "Doctor Who came as a big surprise, the role, the audition and getting involved," says Barrowman. "If you had told me that I would only be doing West End shows for the rest of my existence. I would have been completely happy.

"So I was offered this audition and I thought. I'm a geek. I love sci-fi. I love COMIC books, I love all that kind of stuff. Doctor Who, as a kid. was a huge thing for me, sot thought I have to try for this. And then I did. And that was it."

Captain Jack opened Barrowman up to entirely new audiences, even leading to his own spinoff show Torchwood in 2006. That CBC coproduction began by taking a much riskier, adult slant but was quickly toned down to suit North American audiences. Outside of Doctor Who, Barrowman keeps busy working with reality-television shows like the How Do You Solve A Problem Like Maria? contest recently taped in Toronto and a variety of special projects. The schedule sounds exhausting.

"I never really think about it. I could lie to you and say it been a struggle, but I've never had to struggle. I've worked very hard but I've never had to wait tables," says Barrowman. "I've always created work for myself because I treat myself as a business. I'm the product and although I'm still human and personable, I know that I have to promote myself and create work for myself."

Barrowman is currently promoting a bestselling autobiography and a new CD. 'I know I have a legion of fans who will buy this stuff but I don't do it for them just to troy it. There's got to be a reason to do all of this.' he says. In preparation for the album he shocked producers with stacks of musical tracks he was interested in recording Selections range from Carly Simon's 'You're So Vain" to Stephen Sondheim's 'Being Alive."

In the UK Barrowman has reached an iconic status previously held only by Sir Ian McKellen, the openly gay actor beloved and accepted by young children. seniors and everyone in between. Barrowman can be hosting a children's program one second and talking about his crotch on late-night TV the next.

"The programs I go on, where I get a little saucy, are adult programs after the hours of nine o'clock," he says. "Now if someone puts that on YouTube and it's accessible, that's not my problem. I am very aware of that but I always say to people who do things and soy things about me. 'Please remember that my nieces and nephews read this stuff about me, please remember that other children read this.'"

Waving the flag of gay acceptance, Barrowman ventured into tricky territory with shows like the BBC documentary The Making of Me, where Barrowman explored a large range of genetic and psychological tests to discover the origins of his gayness. "I just want to live my life and be accepted for who I am." he says. "We're normal: I see myself as normal. I don't see myself as someone who is going to burn in hell and have bad things happen to them because I'm gay." Within the hour-long program Barrowman went on an emotional journey that approached the root to his homosexuality through genetic factors.

"People will fucking hate this program because it actually disproves a lot of beliefs and theories," Barrowman says, laughing "I've been in a F-MRI machine, we did DNA testing, testosterone tests, a whole gambit of tests.... It's an exposing program for me. It's nature versus nurture and 1 learned a lot. I learned things about myself that I didn't really know and the outcome is a bit ground-breaking. I had to do it."

Barrowman's temple throbs when discussing the probing way journalists question his sexual habits with his husband, or the irrational rants of Republican commentators in the US. "What gives them the right to say that I should not have the same rights as she does," growls Barrowman, while discussing anti-gay sentiments from the likes of Anne Coulter. 'I do exactly the same things as she does. She puts a dick in her mouth, she goes down on her husband and her husband probably goes down on her. Like I do it to my partner, right? What's the difference? There's no difference. I do it with a man, she does it with a man, so we have a lot in common."

Torchwood airs on Space Friday nights at 10pm. John Barrowman's autobiography. Anything Goes is available front Michael O'Mara Books for around $20. His album, Another Side, is available from Sony/BMG for $15.

Caption: HERE'S LOOKING AT ME. 'I know I'm not ugly," says John Barrowman, the sexy star of Doctor Who and Torchwood

Is Captain Jack as versatile in bed?

If Captain Jack were a companion on classic Doctor?

"It'd have to be [fourth Doctor] Tom Baker because I'd get to be with Sarah Jane."

On society being groin obsessed:

"Why not? Because Mars that’s where life comes from."