Steven Moffat: The man with a monster of a job 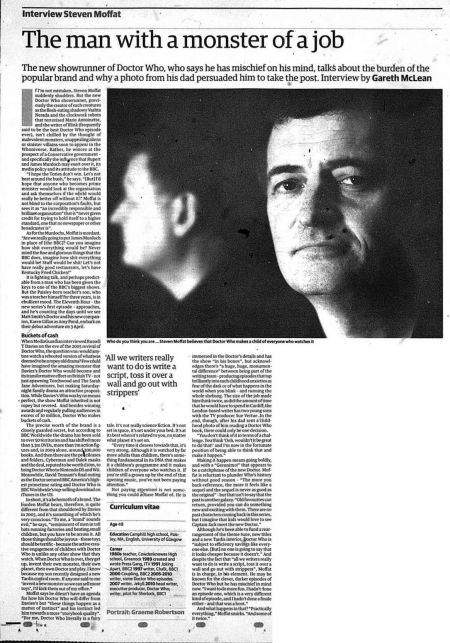 The new showrunner of Doctor Who, who says he has mischief on his mind, talks about the burden of the popular brand and why a photo from his dad persuaded him to take the post. Interview by Gareth McLean: Curriculum vitae

If I'm not mistaken, Steven Moffat suddenly shudders. But the new Doctor Who showrunner, previously the creator of such creatures as the flesh-eating shadowy Vashta Nerada and the clockwork robots that terrorised Marie Antoinette, and the writer of Blink (frequently said to be the best Doctor Who episode ever), isn't chilled by the thought of malevolent monsters, unappealing aliens or sinister villains soon to appear in the Whoniverse. Rather, he winces at the prospect of a Conservative government - and specifically the influence that Rupert and James Murdoch may exert over it, its media policy and its attitude to the BBC.

"I hope the Tories don't win. Let's not beat around the bush," he says. "(But) I'd hope that anyone who becomes prime minister would look at the organisation and ask themselves if the world would really be better off without it." Moffat is not blind to the corporation's faults, but sees it as "an incredibly responsible and brilliant organisation" that is "never given credit for trying to hold itself to a higher standard, one that no newspaper or other broadcaster is".

It is fighting talk, and perhaps predictable from a man who has been given the keys to one of the BBC's biggest shows. But the Paisley-born teacher's son, who was a teacher himself for three years, is in ebullient mood. The Eleventh Hour - the new series's first episode - approaches, and he's counting the days until we see Matt Smith's Doctor and his new companion, Karen Gillan as Amy Pond, embark on their debut adventure on 3 April.

When MediaGuardian interviewed Russell T Davies on the eve of the 2005 revival of Doctor Who, the question was: would anyone watch a rebooted version of what was deemed to be a ropey old drama? Few could have imagined the amazing monster that Davies's Doctor Who would become and its transformative effect on British TV - not just spawning Torchwood and The Sarah Jane Adventures, but making Saturday-night family drama an attractive proposition. While Davies's Who was by no means perfect, the show Moffat inherited is not ropey but revered. And besides winning awards and regularly pulling audiences in excess of 10 million, Doctor Who makes buckets of cash.

The precise worth of the brand is a closely guarded secret, but according to BBC Worldwide the drama has been sold to over 50 territories and has shifted more than 3.3m DVDs, more than 7m action figures and, in 2009 alone, around 300,000 books. And then there are the pencilcases and folders, Cyberman and Dalek masks and the deal, reputed to be worth £10m, to bring Doctor Who to Nintendo DS and Wii. Meanwhile, David Tennant's final outing as the Doctor secured BBC America's highest primetime rating and Doctor Who is BBC Worldwide's top-selling download on iTunes in the US.

In short, it's a behemoth of a brand. The burden Moffat bears, therefore, is quite different from that shouldered by Davies in 2005, and it's something of which he's very conscious."To me, a 'brand' sounds evil," he says, "reminiscent of men in tall hats running factories and beating small children, but you have to be across it. All those things should be joyous - those toys should be terrific - because the active creative engagement of children with Doctor Who is unlike any other show that they watch. When Doctor Who is over, they get up, invent their own monster, their own planet, their own Doctor and play. I know because my son recently designed a new Tardis control room. If anyone said to me 'invent a new monster so we can sell more toys', I'd kick them out of my office."

Moffat says he doesn't have an agenda for how his Doctor Who will differ from Davies's but "these things happen as a matter of instinct" and his instinct led him towards a more "storybook quality". "For me, Doctor Who literally is a fairy tale. It's not really science fiction. It's not set in space, it's set under your bed. It's at its best when it's related to you, no matter what planet it's set on.

"Every time it cleaves towards that, it's very strong. Although it is watched by far more adults than children, there's something fundamental in its DNA that makes it a children's programme and it makes children of everyone who watches it. If you're still a grown up by the end of that opening music, you've not been paying attention."

Not paying attention is not something you could accuse Moffat of. He is immersed in the Doctor's details and has the show "in his bones", but acknowledges there's "a huge, huge, monumental difference" between being part of the writing team - producing episodes that tap brilliantly into such childhood anxieties as fear of the dark or of what happens in the world when you blink - and running the whole shebang. The size of the job made him think twice, as did the amount of time that he would have to spend in Cardiff; the London-based writer has two young sons with the TV producer Sue Vertue. In the end, though, after his dad sent a childhood photo of him reading a Doctor Who book, there could only be one decision.

"You don't think of it in terms of a challenge. You think 'Ooh, wouldn't it be great to do that!' and I'm now in the fortunate position of being able to think that and make it happen."

Making it happen means going boldly, and with a "Geronimo!" that appears to be a catchphrase of the new Doctor. Moffat is reluctant to plunder Who's history without good reason - "The more you back-reference, the more it feels like a sequel and the sequel is never as good as the original" - but that isn't to say that the past is another galaxy. "Old favourites can return, provided you can do something new and exciting with them. There are no past characters coming back in this series, but I imagine that kids would love to see Captain Jack meet the new Doctor."

Although he's been able to fund a rearrangement of the theme tune, new titles and a new Tardis interior, Doctor Who is "subject to efficiency savings like everyone else. (But) no one is going to say that it looks cheaper because it doesn't." And despite the fact that "all we writers really want to do is write a script, toss it over a wall and go out with strippers", Moffat is in charge, in his element. He may be known for the clever, darker episodes of Doctor Who but he has mischief in mind now. "I want to do more fun. I hadn't done an episode one, which is a very different kind of episode, and I hadn't done a finale either - and that was a hoot."

And what happens in that? "Practically everything," Moffat smirks. "And some of it twice."

Caption: Who do you think you are ... Steven Moffat believes that Doctor Who makes a child of everyone who watches it