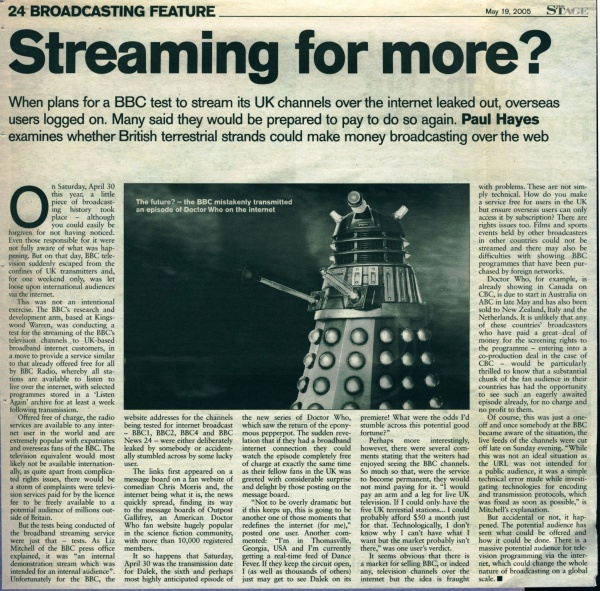 When plans for a BBC test to stream its UK channels over the internet leaked out, overseas users logged on. Many said they would be prepared to pay to do so again. Paul Hayes examines whether British terrestrial strands could make money broadcasting over the web

On Saturday, April 30 this year, a little piece of broadcasting history took place — although you could easily be forgiven for not having noticed. Even those responsible for it were not fully aware of what was happening. But on that day, BBC television suddenly escaped from the confines of UK transmitters and, for one weekend only, was let loose upon international audiences via the internet.

This was not an intentional exercise. The BBC's research and development arm, based at Kingswood Warren, was conducting a test for the streaming of the BBC's television channels to UK-based broadband internet customers, in a move to provide a service similar to that already offered free for all by BBC Radio, whereby all stations are available to listen to live over the internet, with selected programmes stored in a 'Listen Again' archive for at least a week following transmission.

Offered free of charge, the radio services are available to any inter-net user in the world and are extremely popular with expatriates and overeseas fans of the BBC. The television equivalent would most likely not be available internationally, as quite apart from complicated rights issues, there would be a storm of complaints were television services paid for by the licence fee to be freely available to a potential audience of millions outside of Britain.

But the tests being conducted of the broadband streaming service were just that — tests. As Liz Mitchell of the BBC press office explained, it was "an internal demonstration stream which was intended for an internal audience". Unfortunately for the BBC, the website addresses for the channels being tested for internet broadcast — BBC1, BBC2, BBC4 and BBC News 24 — were either deliberately leaked by somebody or accidentally stumbled across by some lucky user.

The links first appeared on a message board on a fan website of comedian Chris Morris and, the internet being what it is, the news quickly spread, finding its way to the message boards of Outpost Gallifrey, an American Doctor Who fan website hugely popular in the science fiction community, with more than 10,000 registered members.

It so happens that Saturday, April 30 was the transmission date for Dalek, the sixth and perhaps most highly anticipated episode of the new series of Doctor Who, which saw the return of the eponymous pepperpot. The sudden revelation that if they had a broadband internet connection they could watch the episode completely free of charge at exactly the same time as their fellow fans in the UK was greeted with considerable surprise and delight by those posting on the message board.

"Not to be overly dramatic but if this keeps up, this is going to be another one of those moments that redefines the internet (for me)," posted one user. Another commented: "I'm in Thomasville, Georgia, USA and I'm currently getting a real-time feed of Dance Fever. If they keep the circuit open, I (as well as thousands of others) just may get to see Dalek on its premiere! What were the odds I'd stumble across this potential good fortune?"

Perhaps more interestingly, however, there were several comments stating that the writers had enjoyed seeing the BBC channels. So much so that, were the service to become permanent, they would not mind paying for it. "I would pay an arm and a leg for live UK television. If I could only have the five UK terrestial stations... I could probably afford $50 a month just for that. Technologically, I don't know why I can't have what I want but the market probably isn't there," was one user's verdict.

It seems obvious that there is a market for selling BBC, or indeed any, television channels over the internet but the idea is fraught with problems. These are not simply technical. How do you make a service free for users in the UK but ensure overseas users can only access it by subscription? There are rights issues too. Films and sports events held by other broadcasters in other countries could not be streamed and there may also be difficulties with showing BBC programmes that have been purchased by foreign networks.

Doctor Who, for example, is already showing in Canada on CBC, is due to start in Australia on ABC in late May and has also been sold to New Zealand, Italy and the Netherlands. It is unlikely that any of these countries' broadcasters who have paid a great deal of money for the screening rights to the programme — entering into a co-production deal in the case of CBC — would be particularly thrilled to know that a substantial chunk of the fan audience in their countries has had the opportunity to see such an eagerly awaited episode already, for no charge and no profit to them.

Of course, this was just a one-off and once somebody at the BBC became aware of the situation, the live feeds of the channels were cut off late on Sunday evening. "While this was not an ideal situation as the URL was not intended for a public audience, it was a simple technical error made while investigating technologies for encoding and transmission protocols, which was fixed as soon as possible," is Mitchell's explanation.

Caption: The future? — the BBC mistakenly transmitted an episode of Doctor Who on the internet