Sunday telly was better back in my prime time 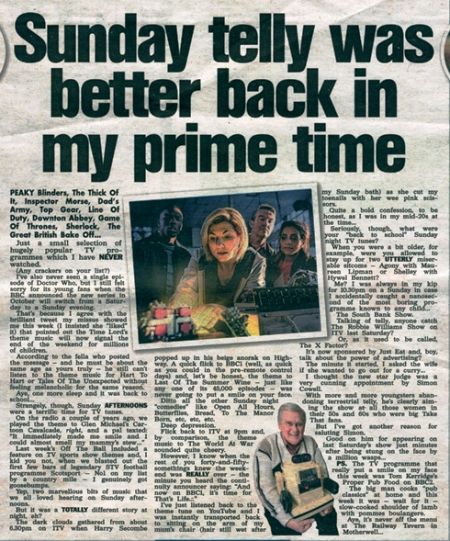 Just a small selection of hugely popular TV programmes which I have NEVER watched.

I've also never seen a single episode of Doctor Who, but I still felt sorry for its young fans when the BBC announced the new series in October will switch from a Saturday to a Sunday evening.

That's because I agree with the brilliant tweet my missus showed me this week (I insisted she "liked" it) that pointed out the Time Lord's theme music will now signal the end of the weekend for millions of children.

According to the fella who posted the message - and he must be about the same age as yours truly - he still can't listen to the theme music for Hart To Hart or Tales Of The Unexpected without feeling melancholic for the same reason.

Aye, one more sleep and it was back to school...

Strangely, though, Sunday AFTERNOONS were a terrific time for TV tunes.

On the radio a couple of years ago, we played the theme to Glen Michael's Cartoon Cavalcade, right, and a pal texted: "It immediately made me smile and I could almost smell my mammy's stew..."

Last week's Off The Ball included a feature on TV sports show themes and, I kid you not, when we blasted out the first few bars of legendary STV football programme Scotsport - No1 on my list by a country mile - I genuinely got goosebumps.

Yep, two marvellous bits of music that we all loved hearing on Sunday afternoons.

But it was a TOTALLY different story at night, eh?

The dark clouds gathered from about 6.30pm on ITV when Harry Secombe popped up in his beige anorak on Highway. A quick flick to BBC1 (well, as quick as you could in the pre-remote control days) and, let's be honest, the theme to Last Of The Summer Wine - just like any one of its 45,000 episodes - was never going to put a smile on your face.

Ditto all the other Sunday night "comedies" like Open All Hours, Butterflies, Bread, To The Manor Born, etc, etc, etc.

Flick back to ITV at 9pm and, by comparison, the theme music to The World At War sounded quite cheery.

However, I know when the rest of you forty-and-fifty-somethings knew the weekend was REALLY over - the minute you heard the continuity announcer saying: "And now on BBC1, it's time for That's Life..."

I've just listened back to the theme tune on YouTube and I was instantly transported back to sitting on the arm of my mum's chair (hair still wet after my Sunday bath) as she cut my toenails with her wee pink scissors.

Seriously, though, what were I your "back to school" Sunday night TV tunes?

When you were a bit older, for example, were you allowed to stay up for two UTTERLY miserable sitcoms - Agony with Maureen Lipman or Shelley with Hywel Bennett?

Me? I was always in my kip for 10.30pm on a Sunday in case I accidentally caught a nanosecond of the most boring programme known to any child...

Talking of telly, anyone catch The Robbie Williams Show on ITV last Saturday?

Or, as it used to be called, The X Factor?

It's now sponsored by Just Eat and, boy, talk about the power of advertising?

The minute it started, I asked the wife if she wanted to go out for a curry...

I thought the new star judge was a very cunning appointment by Simon Cowell.

With more and more youngsters abandoning terrestrial telly, he's clearly aiming the show at all those women in their 50s and 60s who were big Take That fans.

But I've got another reason for saluting Simon.

Good on him for appearing on last Saturday's show just minutes after being stung on the face by a million wasps...

PS. The TV programme that really put a smile on my face this week was Tom Kerridge's Proper Pub Food on BBC2. The big man cooks "pub classics" at home and this week it was - wait for it slow-cooked shoulder of lamb with pommes boulangere.

Aye, it's never aff the menu at The Railway Tavern in Motherwell...