Taking the Mystery Out of Doctor Who??? 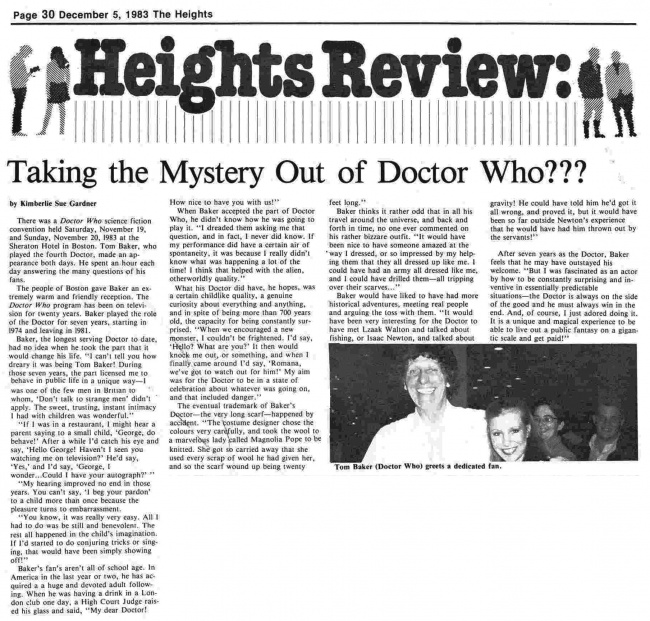 There was a Doctor Who science fiction convention held Saturday, November 19, and Sunday, November 20, 1983 at the Sheraton Hotel in Boston. Tom Baker, who played the fourth Doctor, made an appearance both days. He spent an hour each day answering the many questions of his fans.

The people of Boston gave Baker an extremely warm and friendly reception. The Doctor Who program has been on television for twenty years. Baker played the role of the Doctor for seven years, starting in 1974 and leaving in 1981.

Baker, the longest serving Doctor to date, had no idea when he took the part that it would change his life. "I can't tell you how dreary it was being Tom Baker! During those seven years, the part licensed me to behave in public life in a unique way—I was one of the few men in Britian to whom, 'Don't talk to strange men' didn't apply. The sweet, trusting, instant intimacy had with children was wonderful."

"If I was in a restaurant, I might hear a parent saying to a small child, 'George, do behave!" After a while I'd catch his eye and say, 'Hello George! Haven't I seen you watching me on television?' He'd say, 'Yes,' and I'd say, 'George, I wonder...Could I have your autograph?'"

"My hearing improved no end in those years. You can't say, 'I beg your pardon' to a child more than once because the pleasure turns to embarrassment.

"You know, it was really very easy. All I had to do was be still and benevolent. The rest all happened in the child's imagination. If I'd started to do conjuring tricks or singing, that would have been simply showing off!"

Baker's fan's aren't all of school age. In America in the last year or two, he has acquired a a huge and devoted adult following. When he was having a drink in a London club one day, a High Court Judge raised his glass and said, "My dear Doctor! How nice to have you with us!"

When Baker accepted the part or Doctor Who, he didn't know how he was going to play it. "I dreaded them asking me that question, and in fact, I never did know. If my performance did have a certain air of spontaneity, it was because I really didn't know what was happening a lot of the time! I think that helped with the alien, otherworldly quality."

What his Doctor did have, he hopes, was a certain childlike quality, a genuine curiosity about everything and anything, and in spite of being more than 700 years old, the capacity for being constantly surprised. "When we encouraged a new monster, I couldn't be frightened. I'd say, 'Hello? What are you?' It then would knock me out, or something, and when I finally came around I'd say, 'Romana, we've got to watch out for him!' My aim was for the Doctor to be in a state of celebration about whatever was going on, and that included danger."

The eventual trademark of Baker's Doctor—the very long scarf—happened by accent. "The costume designer chose the colours very carefully, and took the wool to a marvelous lady called Magnolia Pope to be knitted. She got so carried away that she used every scrap of wool he had given her, and so the scarf wound up being twenty feet long."

Baker thinks it rather odd that in all his travel around the universe, and back and forth in time, no one ever commented on his rather bizzare outfit. "It would have been nice to have someone amazed at the way I dressed, or so impressed by my helping them that they all dressed up like me. I could have had an army all dressed like me, and I could have drilled them—all tripping over their scarves..."

After seven years as the Doctor, Baker feels that he may have outstayed his welcome. "But I was fascinated as an actor by how to be constantly surprising and inventive in essentially predictable situations—the Doctor is always on the side of the good and he must always win in the end. And, of course, I just adored doing it. It is a unique and magical experience to be able to live out a public fantasy on a gigantic scale and get paid!"