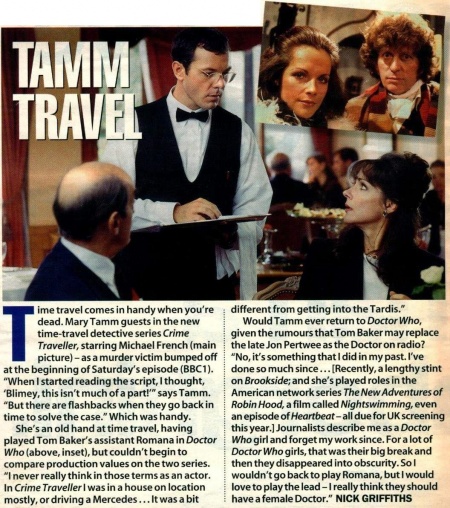 Time travel comes in handy when you're dead. Mary Tamm guests in the new time-travel detective series Crime Traveller, starring Michael French (main picture) - as a murder victim bumped off at the beginning of Saturday's episode (BBC1 ). "When I started reading the script, I thought, 'Blimey, this isn't much of a part!" says Tamm. "But there are flashbacks when they go back in time to solve the case." Which was handy.

She's an old hand at time travel, having played Tom Baker's assistant Romana in Doctor Who (above, inset), but couldn't begin to compare production values on the two series. "I never really think in those terms as an actor. In Crime Traveller I was in a house on location mostly, or driving a Mercedes ... It was a bit different from getting into the Tardis."

Would Tamm ever return to Doctor Who, given the rumours that Tom Baker may replace the late Jon Pertwee as the Doctor on radio? "No, it's something that I did in my past. I've done so much since ... [Recently, a lengthy stint on Brookside; and she's played roles in the American network series The New Adventures of Robin Hood, a film called Nightswimming, even an episode of Heartbeat - all due for UK screening this year.] Journalists describe me as a Doctor Who girl and forget my work since. For a lot of Doctor Who girls, that was their big break and then they disappeared into obscurity. So I wouldn't go back to play Romana, but 1 would love to play the lead - I really think they should have a female Doctor."