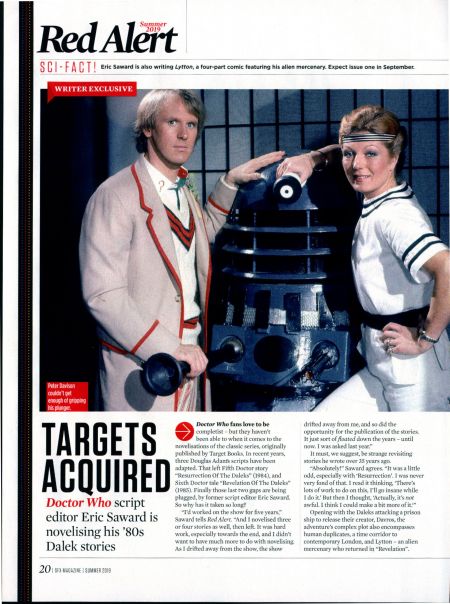 Doctor Who fans love to be completist - but they haven't been able to when it comes to the novelisations of the classic series, originally published by Target Books. In recent years, three Douglas Adams scripts have been adapted. That left Fifth Doctor story "Resurrection Of The Daleks" (1984), and Sixth Doctor tale "Revelation Of The Daleks" (1985). Finally those last two gaps are being plugged, by former script editor Eric Saward. So why has it taken so long?

"I'd worked on the show for five years;' Saward tells Red Alert. "And I novelised three or four stories as well, then left. It was hard work, especially towards the end, and I didn't want to have much more to do with novelising. As I drifted away from the show, the show drifted away from me, and so did the opportunity for the publication of the stories. It just sort of floated down the years - until now. I was asked last year."

It must, we suggest, be strange revisiting stories he wrote over 35 years ago.

"Absolutely!" Saward agrees. "It was a little odd, especially with 'Resurrection'. I was never very fond of that. I read it thinking, 'There's lots of work to do on this, I'll go insane while I do it: But then I thought, 'Actually, it's not awful. I think I could make a bit more of it.

Opening with the Daleks attacking a prison ship to release their creator, Davros, the adventure's complex plot also encompasses human duplicates, a time corridor to contemporary London, and Lytton - an alien mercenary who returned in "Revelation".

Caption: Peter Davison couldn't get enough of gripping his plunger