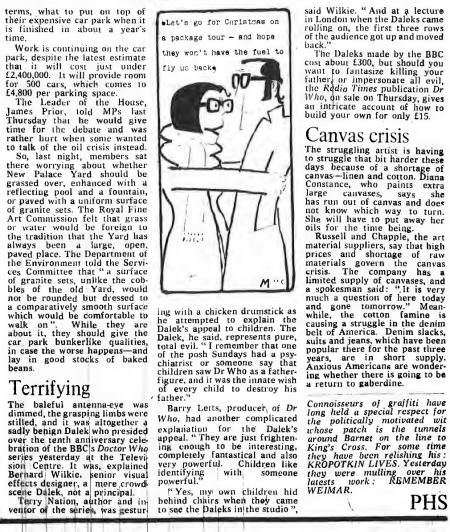 The baleful antenna-eye was dimmed, the grasping limbs were stilled, and it was altogether a sadly benign Dalek who preside over the tenth anniversary celebration of the BBC's Doctor Who series yesterday at the Television Centre. It was, explained Bernard Wilkie, senior visual effects designer, a mere crowd-scene Dalek, not a principal.

Terry Nation, author and inventor of the series, was gesturing with a chicken drumstick as he attempted to explain the Dalek's appeal to children. The Dalek, he said, represents pure, total evil. "I remember that one of the posh Sundays had a psychiatrist or someone say that children saw Dr Who as a father-figure, and it was the innate wish of every child to destroy his father."

Barry Letts, producer of Dr Who, had another complicated explanation for the Dalek's appeal. "They are just frightening enough to be interesting, completely fantastical and also very powerful. Children like identifying with someone powerful."

Yes, my own children hid behind chairs when they came to see the Daleks in the studio", said Wilkie. "And at a lecture in London when the Daleks came rolling on, the first three rows of the audience got up and moved back."

The Daleks made by the BBC cost about £300, but should you want to fantasize killing your father or impersonate all evil, the Radio Times publication Dr Who, on sale on Thursday, gives an intricate account of how to build your own for only £15.