That's my type of art! 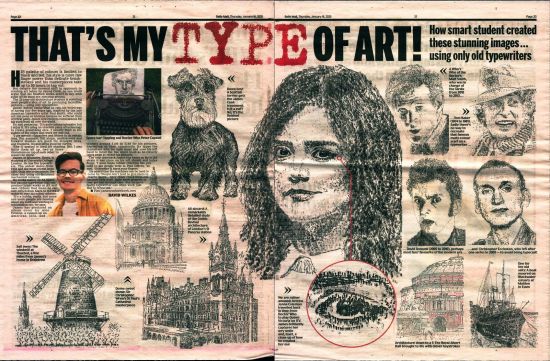 HIS palette of colours is limited to black and red, his style is more raw finger power than delicate brushstrokes and his masterpieces take up to 30 hours to tap out.

But despite the unusual shift in approach to creating art taken by James Cook, no one could argue that his finished works aren't in key with some of the most eye-catching around.

The 23-year-old architecture student is rewriting most people's idea of art by producing incredible pictures — using only typewriters.

James (below) began what he calls his 'weird way of having fun' five years ago, inspired by the late American typewriter artist Paul Smith, who could not use pens or brushes because he suffered from cerebral palsy. James now receives commissions for his work from all over the world.

He said yesterday: 'It's quite labour-intensive but I enjoy it. It's using an obsolete piece of technology to create something nice. I usually start in the middle of the paper and work my way out.

'I use specific characters and letters to do certain jobs. For example, full stops, underscores and forward slashes are good for straight lines, and brackets, Os and zeros good for curves.

'The @ symbol is ideal for shading. But I also build them all up, two or three characters on top of each other, to create the depth.'

James, of Braintree, Essex, is studying at University College London. He has five typewriters. The oldest dates from 1953 and the most recent from 1991. Only one is electronic, the other four being old-fashioned mechanical versions.

He works mainly on A4 paper, but has one typewriter that can produce larger works on A3, and uses ribbons that mean he can only switch from black to red ink if wants to vary his colour scheme.

'It's a hobby, really, but more and more people are hearing about my work and wanting to commission me,' he says.

James has produced an album cover for Alex Preston, a runner-up on American Idol, and charges around £100 to £150 for his pictures, depending on their complexity. He types the characters with his right hand and uses his left hand to move the line space knob as he cleverly types away to create his pictures.

The only drawback James has found so far is the strain it can place on his left thumb and index finger. 'I wear those rubber thimbles like you used to see people wear in Post Offices,' he said. 'Otherwise it hurts your fingers.'

He added that the machines can be hard to come by. 'People don't tend to give them to charity shops -- they either chuck them out because they don't quite work properly or they get lost through time. But for me a faulty typewriter can often work just fine to create art.'

All aboard: A remarkably detailed study of the Gothic Revival architecture of London's St Pancras station

We are rather amused: Actress Jenna Coleman travelled back in time from Doctor Who to play Queen Victoria on ITV. James brilliantly captures her wry smile and, inset, a close-up of how he created her eye

One for the old salts: A boat moored on Blackwater estuary at Maldon in Essex

Architecture down to a T: The Royal Albert Hall brought to life with clever keystrokes

Sail away: The windmill at Thaxted, a few miles from James's home in Braintree

Down boy! A Scottish terrier gets the James Cook treatment. Is it a ruff? No, it's the finished picture