The Cybermen clank back into business 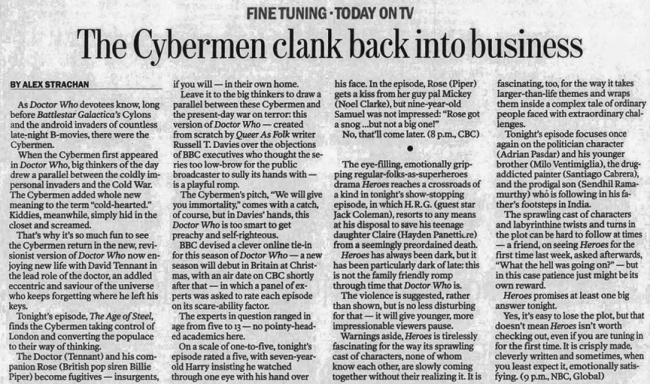 As Doctor Who devotees know, long before Battlestar Galactica's Cylons and the android invaders of countless late-night B-movies, there were the Cybermen.

When the Cybermen first appeared in Doctor Who, big thinkers of the day drew a parallel between the coldly impersonal invaders and the Cold War. The Cybermen added whole new meaning to the term "cold-hearted." Kiddies, meanwhile, simply hid in the closet and screamed.

That's why it's so much fun to see the Cybermen return in the new, revisionist version of Doctor Who now enjoying new life with David Tennant in the lead role of the doctor, an addled eccentric and saviour of the universe who keeps forgetting where he left his keys.

Tonight's episode, The Age of Steel, finds the Cybermen taking control of London and converting the populace to their way of thinking.

The Doctor (Tennant) and his companion Rose (British pop siren Billie Piper) become fugitives — insurgents, if you will — in their own home.

Leave it to the big thinkers to draw a parallel between these Cybermen and the present-day war on terror: this version of Doctor Who — created from scratch by Queer As Folk writer Russell T. Davies over the objections of BBC executives who thought the series too low-brow for the public broadcaster to sully its hands with —is a playful romp.

The Cybermen's pitch, "We will give you immortality," comes with a catch, of course, but in Davies' hands, this Doctor Who is too smart to get preachy and self-righteous.

BBC devised a clever online tie-in for this season of Doctor Who — a new season will debut in Britain at Christmas, with an air date on CBC shortly after that — in which a panel of experts was asked to rate each episode on its scare-ability factor.

The experts in question ranged in age from five to 13 — no pointy-headed academics here.

On a scale of one-to-five, tonight's episode rated a five, with seven-year-old Harry insisting he watched through one eye with his hand over his face. In the episode, Rose (Piper) gets a kiss from her guy pal Mickey (Noel Clarke), but nine-year-old Samuel was not impressed: "Rose got a snog ...but not a big one!"