The Daleks' Are Shooting into Big Business! 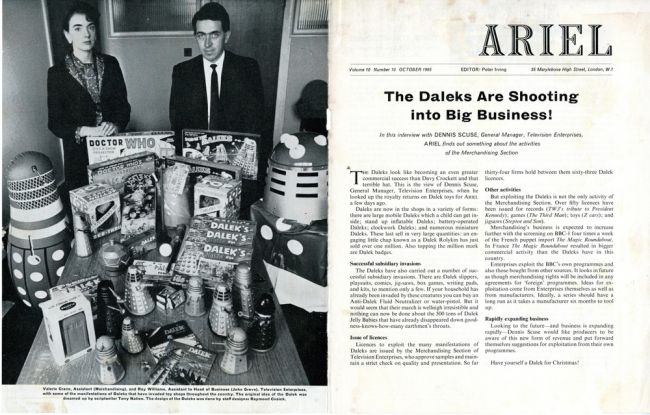 In this interview with Dennis Scuse, General Manager, Television Enterprises, Ariel finds out something about the activities of the Merchandising Section

The Daleks look like becoming an even greater commercial success than Davy Crockett and that terrible hat. This is the view of Dennis screws, general manager, television enterprises, when he looked up the royalty returns on Dalek toys for aerial a few days ago.

Daleks are now in the shops in a variety of forms: there are large mobile Daleks which a child can get inside; stand up inflatable Daleks; battery-operated Daleks; clockwork Daleks; and numerous miniature Daleks. These last sell in very large quantities: an engaging little chap known as a Dalek Rolykin has just sold over one million. Also topping the million mark are Dalek badges.

The Daleks have also carried out a number of successful subsidiary invasions. There are Daleks slippers, playsuits, comics, jig-saws, box games, writing pads, and kits, to mention only a few. If your household has already been invaded by these creatures you can buy an Anti-Dalek Fluid Neutralizer or water-pistol. But it would seem that their march is wellnigh irresistible and nothing can now be done about the 500 tons of Dalek Jelly Babies that have already disappeared down goodness-knows-how many-earthmen's throats.

Licences to exploit the many manifestations of Daleks are issued by the merchandising section of Television Enterprises, who approve samples and maintain a strict check on quality and presentation. So far thirty-four firms remains holed between them sixty-three Dalek licences.

But exploiting the Daleks is not the only activity of the Merchandising Section. Over fifty licences have been issued for records (TW3's tribute to President Kennedy); games (The Third Man); toys (Z Cars); and jigsaws (Steptoe and Son).

Merchandising's business is expected to increase further with the screening on BBC-1 of four times a week of the French puppet import The Magic Roundabout. In France The Magic Roundabout resulted in bigger commercial activity than the Daleks have in this country.

Enterprises exploit the BBC's own programmes and also those bought from other sources. It looks in future as though merchandising rights will be included in any agreements for 'foreign' programs. Ideas for exploitation come from Enterprises themselves as well as for manufacturers. Ideally, the series would have a long run as it takes a manufacturer six months to tool up.

Looking to the future-- and business is expanding rapidly-- Dennis Scuses would like producers to be aware of this new form of revenue and forward themselves suggestions for exploitation from their own programmes.

Have yourself a Dalek for Christmas!