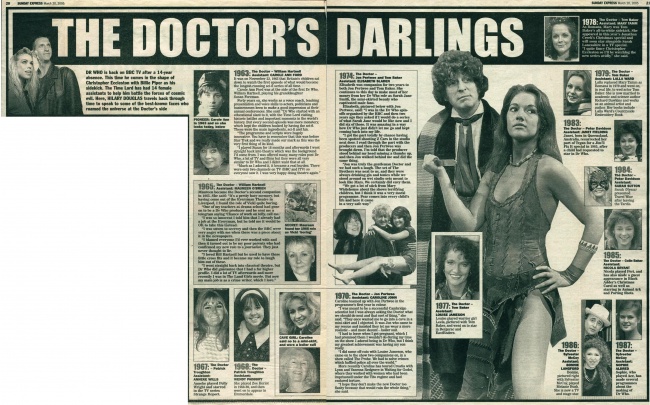 DR WHO is back on BBC TV after a 14-year absence. This time he comes in the shape of Christopher Eccleston with Billie Piper as his sidekick. The Time Lord has had 14 female assistants to help him battle the forces of cosmic evil. Here, HILARY DOUGLAS travels back through time to speak to some of the best-known faces who roamed the universe at the Doctor's side

1963: The Doctor - William Hartnell Assistant: CAROLE ANN FORD It was on November 23, 1963 that Britain's children sat down to watch the first episode of what would become the longest-running sci-fi series of all time.

Carole Ann Ford was at the side of the first Dr Who, William Hartnell, playing his granddaughter Susan Foreman.

Forty years on, she works as a voice coach, teaching presentation and voice skills to actors, politicians and businessmen keen to make a good impression at their annual conferences. She said: "Dr Who started with an educational slant to it, with the Time Lord visiting historic battles and important moments in the world's history. But every second episode was more monstery, which kept the children hooked by having the sci-fi.

These were the main ingredients, sci-fi and fun.

"The programme and scripts were hugely innovative. You have to remember that this was before Star Trek and we really made our mark as this was the very first thing of its kind.

"I played Susan for 18 months and afterwards I went straight back into theatre which was the background I'd come from. I was offered many, many roles post Dr Who, a lot of TV and films but they were all very similar to Dr Who and I didn't want that at all.

"Much as I adored it, it became a real burden. There were only two channels on TV (BBC and ITV) so everyone saw it. I was very happy doing theatre again."

1965: The Doctor - William Hartnell Assistant: MAUREEN O'BRIEN Maureen became the Doctor's second companion in 1965. She said: "It's a pretty hazy memory, but having come out of the Everyman Theatre in Liverpool, I found the role of Vicki quite boring.

"One of my teachers at drama school had gone on to be a Dr Who producer and he sent me a telegram saying 'Chance of work on telly, call me.'

"I was so innocent I told him that I already had a job at the Everyman, but he told me it would be OK to take this instead.

"I was sworn to secrecy and then the BBC were very angry with me when there was a piece about it in the newspapers.

"I blamed everyone I'd ever worked with and then it turned out to be my poor parents who had confirmed my new role to a journalist. They just never thought to lie.

"I loved Bill Hartnell but he used to have these little cross fits and it became my role to laugh him out of these.

"I went straight back into classical theatre, but Dr Who did guarantee that I had a far higher profile. I did a lot of TV afterwards and more recently I was in The Land Girls movie. But now my main job is as a crime writer, which I love."

1968: The Doctor - Patrick Troughton Assistant: WENDY PADBURY She played Zoe Heriot in 1968-69, and then went on to appear in Emmerdale.

1970: The Doctor - Jon Pertwee Assistant: CAROLINE JOHN Caroline teamed up with Jon Pertwee in the programme's first year in colour.

"I was meant to be a successful Cambridge scientist but I was always asking the Doctor what we should do next and that sort of thing, " she said. "They once wanted me to go into a cave in a mini-skirt and I objected. It was Jon who came to my rescue and insisted they let me wear a more realistic - and more decent - boiler suit.

"I had to leave when I got pregnant, which I had promised them I wouldn't do during my time on the show. I adored being in Dr Who, but I think my greatest achievement was having my son really.

"I did some off-cuts with Louise Jameson, who came on to the show two companions on, in a show called The Probe. We had to solve crimes which baffled police all over the world."

More recently Caroline has toured Croatia with Lynn and Vanessa Redgrave in Waiting for Godot, where they worked with women who had been imprisoned under the Tito regime and had endured torture.

"I hope they don't make the new Doctor too flashy because that would ruin the whole thing, " she said.

Elisabeth, pictured below with Jon Pertwee, said: "I was in the Dr Who spinoffs organised by the BBC and then two years ago they asked if I would do a series of what Sarah Jane would be like now and I did six of those. It was amazing in a way how Dr Who just didn't let me go and kept coming back into my life.

"I got the part totally by chance having been spotted shooting Z Cars in the studio next door. I read through the part with the producers and then Jon Pertwee was brought down. I'm told that the producer stood behind my head miming a thumbs up, and then Jon walked behind me and did the same thing.

"Jon was truly the gentleman Doctor and we had such a laugh. The set of The Brothers was next to us, and they were always drinking gin and tonics while we stood around on wet studio sets meant to look like Mars. We certainly did envy them.

"We got a lot of stick from Mary Whitehouse about the shows terrifying children, but I think it was a very moral programme. Fear comes into every child's life and here it came in a very safe way."

1978: The Doctor - Tom Baker Assistant: MARY TAMM As Romana, Mary was Tom Baker's all-in-white sidekick. She appeared in this year's Jonathan Creek's Christmas special and will soon star alongside Sarah Lancashire in a TV special.

"I quite fancy Christopher Eccleston so I'll be watching the new series avidly, " she said.

1979: The Doctor - Tom Baker Assistant: LALLA WARD Lalla replaced Mary Tamm as Romana in 1979 and went on, in real life, to wed actor Tom Baker. She is now married to academic and science author Richard Dawkins and works as an animal artist and author. Her books include Lalla Ward's Countryside Embroidery Book.

1983: The Doctor - Peter Davidson Assistant: JANET FIELDING Janet, born in Queensland, Australia, resurrected her part of Tegan for a Jim'll Fix It special in 1985, after a child had requested to star in Dr Who.

1985: The Doctor - Colin Baker Assistant: NICOLA BRYANT Nicola played Peri, and has also made a guest appearance in Black Adder's Christmas Carol as well as starring in Animal Ark and Parting Shots.

She is now a TV and stage star.

1987: The Doctor - Sylvester McCoy Assistant: SOPHIE ALDRED Sophie, who played Ace, has made several programmes about the making of Dr Who.