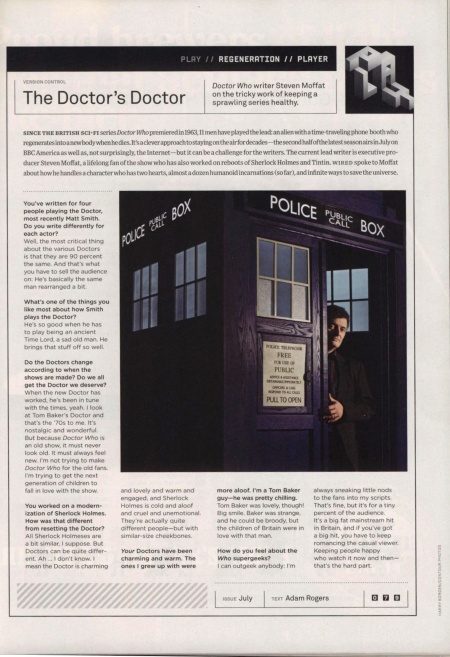 Doctor Who writer Steven Moffat on the tricky work of keeping a sprawling series healthy.

SINCE THE BRITISH SCI-FI series Doctor Who premiered in 1963, 11 men have played the lead: an alien with a time-traveling phone booth who regenerates into a new body when he dies. It's a clever approach to staying on the air for decades—the second half of the latest season airs in July on BBC America as well as, not surprisingly, the Internet—but it can be a challenge for the writers. The current lead writer is executive producer Steven Moffat, a lifelong fan of the show who has also worked on reboots of Sherlock Holmes and Tintin. WIRED spoke to Moffat about how he handles a character who has two hearts, almost a dozen humanoid incarnations (so far), and infinite ways to save the universe.

You've written for four people playing the Doctor, most recently Matt Smith. Do you write differently for each actor?

Well, the most critical thing about the various Doctors is that they are 90 percent the same. And that's what you have to sell the audience on: He's basically the same man rearranged a bit.

What's one of the things you like most about how Smith plays the Doctor?

He's so good when he has to play being an ancient Time Lord, a sad old man. He brings that stuff off so well.

Do the Doctors change according to when the shows are made? Do we all get the Doctor we deserve? When the new Doctor has worked, he's been in tune with the times, yeah. I look at Tom Baker's Doctor and that's the '70s to me. It's nostalgic and wonderful. But because Doctor Who is an old show, it must never look old. It must always feel new. I'm not trying to make Doctor Who for the old fans. I'm trying to get the next generation of children to fall in love with the show.

You worked on a modernization of Sherlock Holmes. How was that different from resetting the Doctor? All Sherlock Holmeses are a bit similar. I suppose. But Doctors can be quite different. Ah I don't know. I mean the Doctor is charming

and lovely and warm and engaged, and Sherlock Holmes is cold and aloof and cruel and unemotional. They're actually quite different people—but with similar-size cheekbones.

Your Doctors have been charming and warm. The ones I grew up with were more aloof. I'm a Tom Baker guy—he was pretty chilling.

Tom Baker was lovely, though! Big smile. Baker was strange, and he could be broody, but the children of Britain were in love with that man.

How do you feel about the Who supergeeks?

I can outgeek anybody: I'm always sneaking little nods to the fans into my scripts. That's fine, but it's for a tiny percent of the audience. It's a big fat mainstream hit in Britain, and if you've got a big hit, you have to keep romancing the casual viewer. Keeping people happy who watch it now and then—that's the hard part.