The Doctor Is In Safe Hands 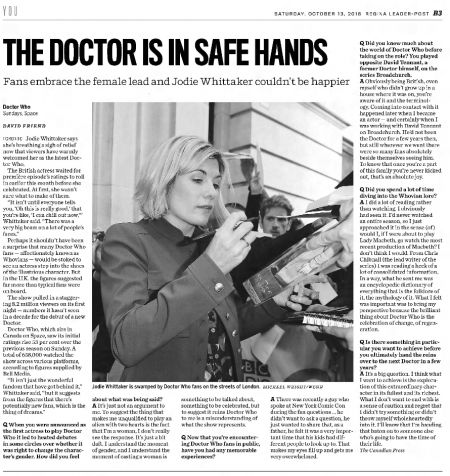 TORONTO Jodie Whittaker says she's breathing a sigh of relief now that viewers have warmly welcomed her as the latest Doctor Who.

The British actress waited for premiere episode's ratings to roll in earlier this month before she celebrated. At first, she wasn't sure what to make of them.

"It isn't until everyone tells you, 'Oh this is really good,' that you're like, 'I can chill out now,"' Whittaker said. "There was a very big beam on a lot of people's faces."

Perhaps it shouldn't have been a surprise that many Doctor Who fans — affectionately known as Whovians — would be stoked to see an actress step into the shoes of the illustrious character. But in the U.K. the figures suggested far more than typical fans were on board.

The show pulled in a staggering 8.2 million viewers on its first night — numbers it hasn't seen in a decade for the debut of a new Doctor.

Doctor Who, which airs in Canada on Space, saw its initial ratings rise 53 per cent over the previous season on Sunday. A total of 658,000 watched the show across various platforms, according to figures supplied by Bell Media.

"It isn't just the wonderful fandom that have got behind it," Whittaker said, "but it suggests from the figures that there's potentially new fans, which is the thing of dreams."

Q When you were announced as the first actress to play Doctor Who it led to heated debates in some circles over whether it was right to change the character's gender. How did you feel about what was being said?

A It's just not an argument to me. To suggest the thing that makes me unqualified to play an alien with two hearts is the fact that I'm a woman, I don't really see the response. It's just a bit daft. I understand the moment of gender, and I understand the moment of casting a woman is something to be talked about, something to be celebrated, but to suggest it ruins Doctor Who to me is a misunderstanding of what the show represents.

Q Now that you're encountering Doctor Who fans in public, have you had any memorable experiences?

A There was recently a guy who spoke at New York Comic Con during the fan questions ... he didn't want to ask a question, he just wanted to share that, as a father, he felt it was a very important time that his kids had different people to look up to. That makes my eyes fill up and gets me very overwhelmed.

Q Did you know much about the world of Doctor Who before taking on the role? You played opposite David Tennant, a former Doctor himself, on the series Broadchurch.

A Obviously being British, even myself who didn't grow up in a house where it was on, you're aware of it and the terminology. Coming into contact with it happened later when I became an actor — and certainly when I was working with David Tennant on Broadchurch. He'd not been the Doctor for a few years then, but still wherever we went there were so many fans absolutely beside themselves seeing him. To know that once you're a part of this family you're never kicked out, that's an absolute joy.

Q Did you spend a lot of time diving into the Whovian lore?

A I did a lot of reading rather than watching. I obviously had seen it. I'd never watched an entire season, so I just approached it in the sense (of) would I, if I were about to play Lady Macbeth, go watch the most recent production of Macbeth? I don't think I would. From Chris Chibnall (the lead writer of the series) I was reading a heck of a lot of consolidated information. In a way, what he sent me was an encyclopedic dictionary of everything that is the folklore of it, the mythology of it. What I felt was important was to bring my perspective because the brilliant thing about Doctor Who is the celebration of change, of regeneration.

Q Is there something in particular you want to achieve before you ultimately hand the reins over to the next Doctor in a few years?

A It's a big question. I think what I want to achieve is the exploration of this extraordinary character in its fullest and its richest. What I don't want to end with is a sense of caution and regret that I didn't try something or didn't throw myself wholeheartedly into it. I'll know that I'm handing that baton on to someone else who's going to have the time of their life.

Caption: Jodie Whittaker is swamped by Doctor Who fans on the streets of London.