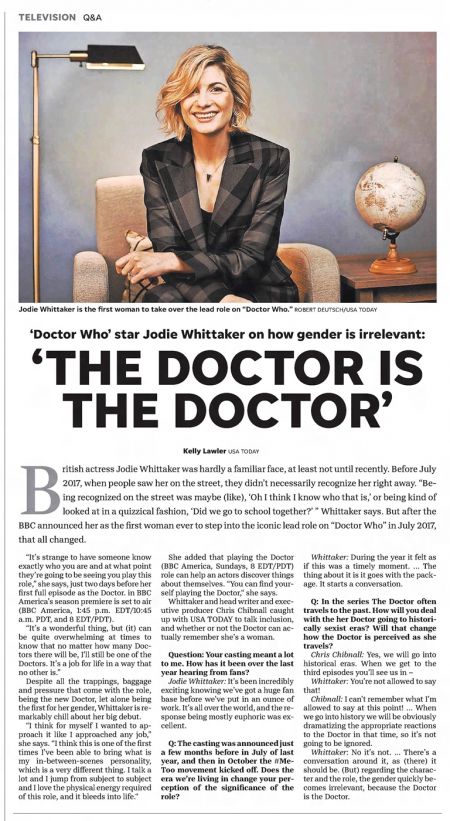 'Doctor Who' star Jodie Whittaker on how gender is irrelevant:

British actress Jodie Whittaker was hardly a familiar face, at least not until recently. Before July 2017, when people saw her on the street, they didn't necessarily recognize her right away. "Being recognized on the street was maybe (like), 'Oh I think I know who that is; or being kind of looked at in a quizzical fashion, 'Did we go to school together?' " Whittaker says. But after the BBC announced her as the first woman ever to step into the iconic lead role on "Doctor Who" in July 2017, that all changed.

"It's strange to have someone know exactly who you are and at what point they're going to be seeing you play this role," she says, just two days before her first full episode as the Doctor. in BBC America's season premiere is set to air (BBC America, 1:45 p.m. EDT/10:45 a.m. PDT, and 8 EDT/PDT).

"It's a wonderful thing, but (it) can be quite overwhelming at times to know that no matter how many Doctors there will be, I'll still be one of the Doctors. It's a job for life in a way that no other is."

Despite all the trappings, baggage and pressure that come with the role, being the new Doctor, let alone being the first for her gender, Whittaker is remarkably chill about her big debut.

"I think for myself I wanted to approach it like I approached any job," she says. "I think this is one of the first times I've been able to bring what is my in-between-scenes personality, which is a very different thing. I talk a lot and I jump from subject to subject and I love the physical energy required of this role, and it bleeds into life."

Whittaker and head writer and executive producer Chris Chibnall caught up with USA TODAY to talk inclusion, and whether or not the Doctor can actually remember she's a woman.

Question: Your casting meant a lot to me. How has it been over the last year hearing from fans?

Jodie Whittaker: It's been incredibly exciting knowing we've got a huge fan base before we've put in an ounce of work. It's all over the world, and the response being mostly euphoric was excellent.

Q: The casting was announced just a few months before in July of last year, and then in October the #Me-Too movement kicked off. Does the era we're living in change your perception of the significance of the role?

Whittaker: During the year it felt as if this was a timely moment. ... The thing about it is it goes with the package. It starts a conversation.

Q: In the series The Doctor often travels to the past. How will you deal with the her Doctor going to historically sexist eras? Will that change how the Doctor is perceived as she travels?

Chris Chibnall: Yes, we will go into historical eras. When we get to the third episodes you'll see us in -

Whittaker: You're not allowed to say that!

Chibnall: I can't remember what I'm allowed to say at this point! ... When we go into history we will be obviously dramatizing the appropriate reactions to the Doctor in that time, so it's not going to be ignored.

Whittaker: No it's not. ... There's a conversation around it, as (there) it should be. (But) regarding the character and the role, the gender quickly becomes irrelevant, because the Doctor is the Doctor.

Caption: Jodie Whittaker is the first woman to take over the lead role on "Doctor Who."