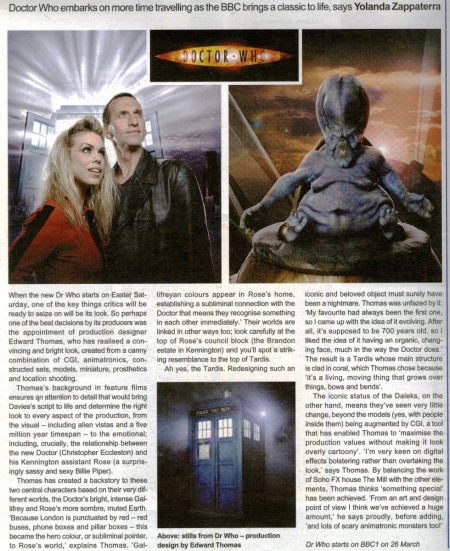 Doctor Who embarks on more time travelling as the BBC brings a classic to life, says Yolanda Zappaterra

When the new Dr Who starts on Easter Saturday, one of the key things critics will be ready to seize on will be its look. So perhaps one of the best decisions by its producers was the appointment of production designer Edward Thomas, who has realised a convincing and bright look, created from a canny combination of CGI, animatronics, constructed sets, models, miniature, prosthetics and location shooting.

Thomas's background in feature films ensures an attention to detail that would bring Davies's script to life and determine the right look to every aspect of the production, from the visual - including alien vistas and a five million year timespan - to the emotional; including, crucially, the relationship between the new Doctor (Christopher Eccleston) and his Kennington assistant Rose (a surprisingly sassy and sexy Billie Piper).

Thomas has created a backstory to these two central characters based on their very different worlds, the Doctor's bright, intense Gallifrey and Rose's more sombre, muted Earth. 'Because London is punctuated by red - red buses, phone boxes and pillar boxes - this became the hero colour, or subliminal pointer, to Rose's world,' explains Thomas. 'Gallifreyan colours appear in Rose's home, establishing a subliminal connection with the Doctor that means they recognise something in each other immediately.' Their worlds are linked in other ways too; look carefully at the top of Rose's council block (the Brandon estate in Kennington) and you'll spot a striking resemblance to the top of Tardis.

Ah yes, the Tardis. Redesigning such an iconic and beloved object must surely have been a nightmare. Thomas was unfazed by it: 'My favourite had always been the first one, so I came up with the idea of it evolving. After all, it's supposed to be 700 years old, so I liked the idea of it having an organic, changing face, much in the way the Doctor does.' The result is a Tardis whose main structure is clad in coral, which Thomas chose because 'it's a living, moving thing that grows over things, bows and bends'.

The iconic status of the Daleks, on the other hand, means they've seen very little change, beyond the models (yes, with people inside them) being augmented by CGI, a tool that has enabled Thomas to 'maximise the production values without making it look overly cartoony'. 'I'm very keen on digital effects bolstering rather than overtaking the look,' says Thomas. By balancing the work of Soho FX house The Mill with the other elements, Thomas thinks 'something special' has been achieved. 'From an art and design point of view I think we've achieved a huge amount,' he says proudly, before adding, 'and lots of scary animatronic monsters too!'