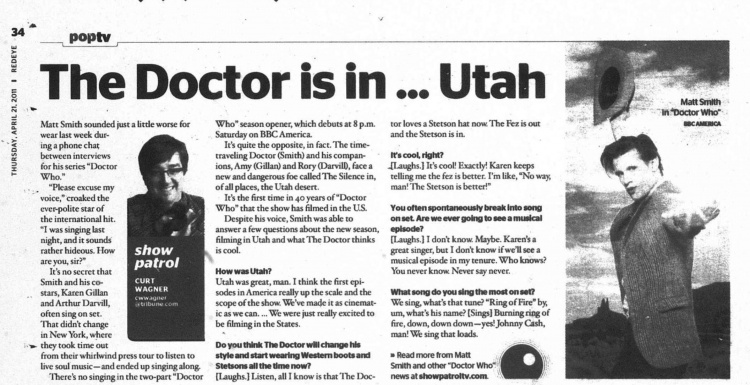 Matt Smith sounded just a little worse for wear last week during a phone chat between interviews for his series "Doctor Who."

"Please excuse my voice" croaked the ever-polite star of the international hit. "I was singing last night, and it sounds rather hideous. How are you, sir?"

It's no secret that Smith and his costars, Karen Gillan and Arthur Darvill, often sing on set. That didn't change in New York, where they took time out from their whirlwind press tour to listen to live soul music—and ended up singing along. There's no singing in the two-part "Doctor Who" season opener, which debuts at 8 p.m. Saturday on BBC America.

It's quite the opposite, in fact. The time-traveling Doctor (Smith) and his companions, Amy (Gillan) and Rory (Darvill) face a new and dangerous foe called The Silence in, of all places, the Utah desert.

It's the first time in 40 years of "Doctor Who" that the show has filmed in the U.S. Despite his voice, Smith was able to answer a few questions about the new season, filming in Utah and what The Doctor thinks is cool.

Utah was great, man. I think the first episodes in America really up the scale and the scope of the show. We've made it as cinematic as we can.... We were just really excited to be filming in the States.

Do you think The Doctor will change his style and start wowing Western boots and Stetsons all the time now?

[Laughs.] Listen, all I know is that The Doc tor loves a Stetson hat now The Fez is out and the Stetson is in.

(Laughs.) It's cool! Exactly! Karen keeps telling me the fez is better. I'm like, 'No way, man! The Stetson is better!"

You often spontaneously break into song on set Are we ever going to see a musical episode?

(Laughs) I don't know Maybe. Karen's a great singer, but I don't know if we'll see a musical episode in my tenure. Who knows? You never know. Never say never.

What song do you sing the most on set?

We sing, what's that tune? "Ring of Fire" by, um, what's his name? (Sings) Burning ring of fire, down, down down—yes! Johnny Cash, man! We sing that loads.