The Doctor is in for season three 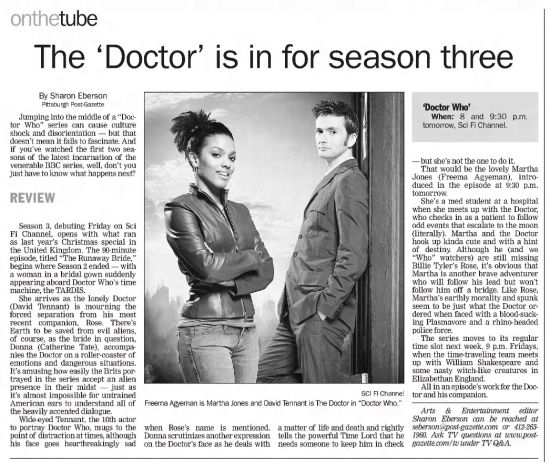 Jumping into the middle of a "Doctor Who" series can cause culture shock and disorientation — but that doesn't mean it fails to fascinate. And if you've watched the first two seasons of the latest incarnation of the venerable BBC series, well, don't you just have to know what happens next?

Season 3, debuting Friday on Sci Fi Channel, opens with what ran as last year's Christmas special in the United Kingdom. The 90-minute episode, titled "The Runaway Bride," begins where Season 2 ended — with a woman in a bridal gown suddenly appearing aboard Doctor Who's time machine, the TARDIS.

She arrives as the lonely Doctor (David Tennant) is mourning the forced separation from his most recent companion, Rose. There's Earth to be saved from evil aliens, of course, as the bride in question, Donna (Catherine Tate), accompanies the Doctor on a roller-coaster of emotions and dangerous situations. It's amusing how easily the Brits portrayed in the series accept an alien presence in their midst — just as it's almost impossible for untrained American ears to understand all of the heavily accented dialogue.

Wide-eyed Tennant, the 10th actor to portray Doctor Who, mugs to the point of distraction at times, although his face goes heartbreakingly sad when Rose's name is mentioned. a matter of life and death and rightly Donna scrutinizes another expression tells the powerful Time Lord that he on the Doctor's face as he deals with needs someone to keep him in check — but she's not the one to do it.

That would be the lovely Martha Jones (Freema Agyeman), introduced in the episode at 9:30 p.m. tomorrow

She's a med student at a hospital when she meets up with the Doctor, who checks in as a patient to follow odd events that escalate to the moon (literally). Martha and the Doctor hook up kinda cute and with a hint of destiny. Although he (and we "Who" watchers) are still missing Billie Tyler's Rose, it's obvious that Martha is another brave adventurer who will follow his lead but won't follow him off a bridge. Like Rose, Martha's earthly morality and spunk seem to be just what the Doctor ordered when faced with a blood-sucking Plasmavore and a rhino-headed police force.

The series moves to its regular time slot next week, 9 p.m. Fridays, when the time-traveling team meets up with William Shakespeare and some nasty witch-like creatures in Elizabethan England.

All in an episode's work for the Doctor and his companion.

Caption: Freema Agyeman is Martha Jones and David Tennant is The Doctor in "Doctor Who."