The Doctor will scare you now 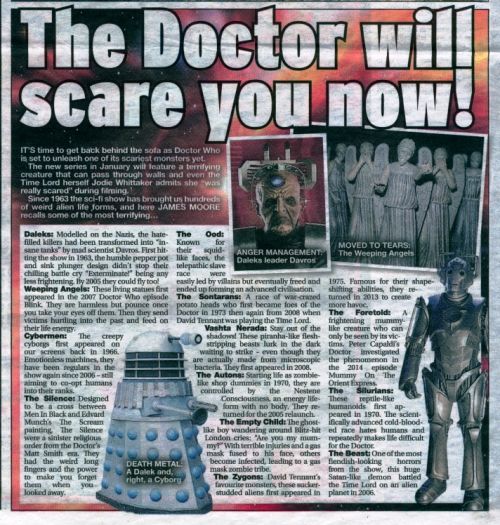 IT'S time to get back behind the sofa as Doctor Who is set to unleash one of its scariest monsters yet.

The new series in January will feature a terrifying, creature that can pass through walls and even the Time Lord herself Jodie Whittaker admits she really scared" during filming.

Since 1963 the sci-fi show has brought us hundreds of weird alien life forms, and here JAMES MOORE recalls some of the most terrifying...

Daleks: Modelled on the Nazis, the hate-filled killers had been transformed into "insane tanks" by mad scientist Davros. First hitting the show in 1963, the humble pepper pot and sink plunger design didn't stop their chilling battle cry "Exterminate!" being any less frightening. By 2005 they could fly too!

Weeping Angels: These living statues first appeared in the 2007 Doctor Who episode Blink. They are harmless but pounce once you take your eyes off them. Then they send victims hurtling into the past and feed on their life energy.

Cybermen: The creepy cyborgs first appeared on our screens back in 1966. Emotionless machines, they have been regulars in the show again since 2006 - still aiming to co-opt humans into their ranks.

The Silence: Designed to be a cross between 'Men In Black and Edvard Munch's The Scream painting, The Silence were a sinister religious order from the Doctor's Matt Smith era. They had the weird long fingers and the power to make you forget them when you looked away.

The Ood: Known for their squid-like faces, the telepathic slave race were easily led by villains but eventually freed and ended up forming an advanced civilisation.

The Sontarans: A race of war-crazed potato heads who first became foes of the Doctor in 1973 then again from 2008 when David Tennant was playing the Time Lord.

Vashta Nerada: Stay out of the shadows! These piranha-like flesh-30 stripping beasts lurk in the dark waiting to strike - even though they are actually made from microscopic bacteria. They first appeared in 2008.

The Autons: Starting life as zombie-like shop dummies in 1970, they are controlled by the Nestene Consciousness, an energy life-a form with no body. They returned for the 2005 relaunch.

The Empty Child: The ghostlike boy wandering around Blitz-hit London cries: Are you my mummy?" With terrible injuries and a gas mask fused to his face, others become infected, leading to a gas mask zombie tribe.

The Zygons: David Tennant's favourite monsters, these sucker-studded aliens first appeared in 1975. Famous for their shapeshifting abilities, they returned in 2013 to create more havoc.

The Foretold: A frightening mummy-like creature who can only be seen by its victims. Peter Capaldi's Doctor investigated the phenomenon in the 2014 episode Mummy On The Orient Express.

The Silurians: These reptile-like humanoids first appeared in 1970. The scientifically advanced cold-blooded race hates humans and repeatedly makes life difficult for the Doctor.

The Beast: One of the most fiendish-looking horrors from the show, this huge Satan-like demon battled the Time Lord on an alien planet in 2006.

DEATH METAL: A Dalek and, right, a Cyborg

MOVED TO TEARS: The Weeping Angels