The Dr Who rogues gallery 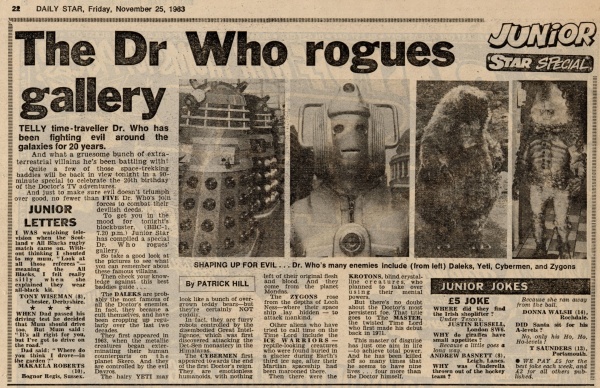 TELLY time-traveller Dr. Who has been fighting evil around the galaxies for 20 years.

And what a gruesome bunch of extra-terrestrial villains he's been battling with !

Quite a few of those space-trekking baddies will be back in view tonight in a 90 minute special to celebrate the 20th birthday of the Doctor's TV adventures.

And just to make sure evil doesn't triumph over good, no fewer than FIVE Dr. Who's join forces to combat their devilish deeds.

To get you in the mood for tonight's blockbuster. (BBC-1, 7.20 p.m.) Junior Star has compiled a special Dr. Who rogues' gallery.

So take a good look at the pictures to see what you can remember about these famous villains.

Then check your knowledge against this best baddies guide ...

The DALEKS are probably the most famous of all the Doctor's enemies. In fact, they became a cult themselves, and have been cropping up regularly over the last two decades.

They first appeared in 1963, when the metallic creatures began exterminating their human counterparts on the planet Skaro. And they are controlled by the evil Davros.

The hairy YETI may look like a bunch of overgrown teddy bears—but they're certainly NOT cuddly.

In fact, they are furry robots controlled by the disembodied Great Intelligence, which was first discovered attacking the Det-Sen monastery in the Himalayas.

The CYBERMEN first appeared towards the end of the first Doctor's reign. They are emotionless humanoids. with nothing left of their original flesh and blood. And they come from the planet Mondas.

The ZYGONS rose from the depths of Loch Ness—where their space ship lay hidden — to attack mankind.

Other aliens who have tried to call time on the Time Lord include the ICE WARRIORS — reptile-looking creatures who were found buried in a glacier during Earth's third ice age, after their Martian spaceship had been marooned there.

Then there were the KROTONS, blind crystalline creatures, who planned to take over using their mental powers.

But there's no doubt about the Doctor's most persistent foe. That title goes to The MASTER, the twisted Time Lord who first made his debut back in 1971.

This master of disguise has just one aim in life —to achieve total power. And he has been killed off so many times that he seems to have nine lives ... four more than the Doctor himself.

Caption: SHAPING UP FOR EVIL ... Dr. Who's many enemies include (from left) Daleks, Yeti, Cybermen, and Zygons