The Great Doctor Who Quiz 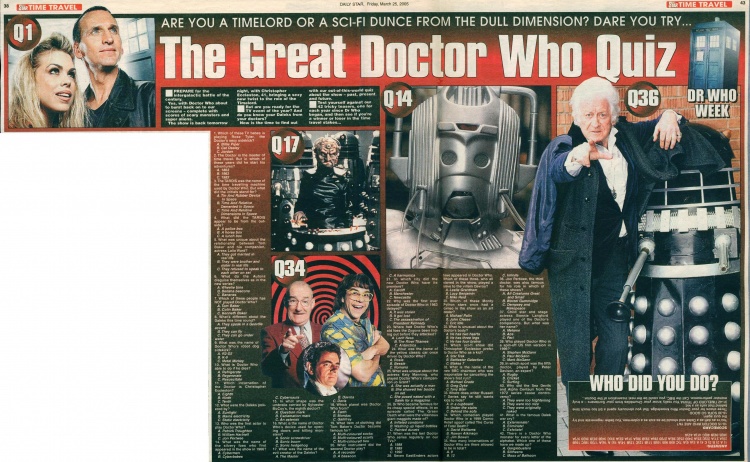 Yes, with Doctor Who about to burst back on to our screens - complete with cores of scary monsters and super aliens.

The show is back tomorrow night, with Christopher Eccleston, 41, bringing a sexy new twist to the role of the Timelord.

But are you ready for the TV event of the year? And do you know your Daleks from your doctors?

Now is the time to find out with our out-of-this-world quiz -bout the show - past, present and future.

Test yourself against our 42 tricky teasers, one for each year since Dr Who began, and then see if you're a winner or loser in the time ravel stakes...

1. Which of these TV babes is playing Rose Tyler, the Doctor's sexy sidekick?

2. The Doctor is the master of time travel. But in which of these years did he start his adventures?

3. The TARDIS was the name of the time travelling machine used by Doctor Who. But what did the initials stand for?

A. Tin And Rubber Device In Space

B. Time And Relative Demented In Space

4. What did the TARDIS appear to be from the outside?

A. A police box

B. A horse box

5. What was unique about the relationship between Tom Baker and his companion, actress Lalla Ward?

A. They got married in real life

B They were brother and sister in real life

C. They refused to speak to each other on set

6. What do the Autons disguise themselves as in the new series?

7. Which of these people has NOT played Doctor Who?

8. What's different about the Daleks this time round?

A. They speak in a Geordie accent

B. They can fly

C. They can go under water

9. What was the name of Doctor Who's robot dog sidekick?

11. Which incarnation of the Doctor is Christopher Eccleston?

12. What were the Daleks powered by?

13. Who was the first actor to play Doctor Who?

14. What was the name of the silvery foes who first appeared in the show in 1966?

15. In what shape was the umbrella carried by Sylvester McCoy's. the eighth doctor?

16. What is the name of Doctor Who's device used for opening doors and killing monsters?

17. What was the name of the evil creator of the Daleks?

18. Which planet was Doctor Who from?

19. What item of clothing did Tom Baker's Doctor become famous for?

20. What instrument did the second Doctor play?

21. In which city did the new Doctor Who have its premiere?

A. It was stolen

B. It got lost

C. The assassination of President Kennedy

23. Where had Doctor Who's old foes the Zygons been hiding out before they attacked?

B. The River Thames

24. What was the name of the yellow classic car once driven by Doctor Who?

25. What was unique about the actress Katy Manning, who played Doctor Who's companion Jo Grant?

A. She was actually a man

B. She showed her boobs on set

C. She posed naked with a Dalek for a magazine

26. Dr Who became famous for its cheap special effects. In an episode called The Green Death what were the villainous giant maggots made of?

B. Washing up liquid bottles

27. When was the last Doctor Who series regularly on our TVs?

28. Seven EastEnders actors have appeared in Doctor Who. Which of these three, who all starred in the show, played a slave to the villain Davros?

29. Which of these Monty Python stars once had a cameo in the show as an art dealer?

30. What is unusual about the Doctor's body?

A. He has two hearts

B. He has three legs

C. He has four brains

31. Which sci-fi show did Christopher Eccleston prefer to Doctor Who as a kid?

32. What is the name of the new BBC chairman who was responsible for cancelling the show's first run?

33. Where does writer Russell T Davies say he still wants kids to hide?

A. In a cupboard

B. Under the stairs

C. Behind the sofa

34. Which comedian played Doctor Who in a 1999 Comic Relief spoof called The Curse of Fatal Death?

35. How many incarnations of Doctor Who are there allowed to be in total?

36. Jon Pertwee, the third doctor, was also famous for his role in which of these shows?

A. All Creatures Great and Small

37. Child star and stage actress Bonnie Langford played one of the Doctor's companions. But what was her name?

39. In which sport was the fifth doctor, played by Peter Davison, an expert?

40. Why did the Sea Devils and Alpha Centauri from the 1972 series cause controversy?

A. They were too frightening

B. They were too nice

C. They were originally naked

41. What is the famous Dalek war cry?

42. There is a Doctor Who monster for every letter of the alphabet. Which one of these have we made up?

Who did you do?

10-15 DOCTOR WHO ARE YA? You're as daft as a Dalek and should be as sick as a cyberman. You better regenerate and try the quiz again.

16-30 SOFA SO GOOD Three chairs for your Doctor Who knowledge. But you obviously spent a bit too much time behind that sofa as a kid.

31-42 TIMELORD OF TRIVIA You really know your Chumblies from your Sontarans - a truly monster performance. Call the BBC. you could be the next incarnation of the Doctor...