The Leicester man behind "Doctor Who" 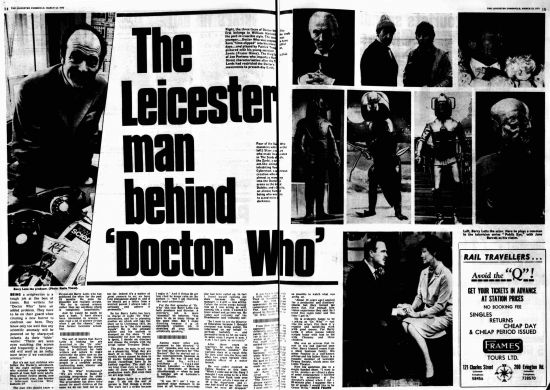 BEING a scriptwriter is a tough job at the best of times. But writers for "Doctor Who" have an added problem. They have to be on their guard when creating a new horror to confront our hero. They know only too well that any scientific anomaly will be pounced on by sharp-eyed infants. As their "bible" warns: "There are keen eyes watching the screen and frequently a five-year-old will send us an indignant letter if we contradict science."

But it's not just children who follow the Doctor's adventures. Of the eight million viewers who watched each episode last month at least half were adults. This science fiction series, now in its seventh year, has become a television tradition. What sustains it?

The man who should know is 45-year-old Barry Letts who has produced the show for the past 18 months. He aims for plausible and realistic scripts. "We try to extend science rather than say anything which is completely unscientific."

And he would be quick to spot a boob. "I have always been interested in science. I also read a lot of science fiction when I get the chance," says this former Leicester school boy.

The sort of stories that Barry Letts is looking for are described in the "Dr. who" format. "Experience has shown that it is difficult for both writers and actors to make believable the alien race on the alien planet. So the stories should concern a group of real people in a credible setting, confronting some sinister and unknown menace."

Is "Dr Who frightening? "We are trying to make an exciting programme for older boys and girls and grown-ups. The programme has never been meant for small children all the same we do our best not to go too far. Indeed it's a matter of great concern to us; we have long discussions about it, and if we should get a letter from a worried parent I always take it seriously and answer it personally."

So far Barry Letts has been in charge of eight "Dr. Who" adventures, and he is planning another six which will take the show up to Christmas 1972. As producer he is the first among equals". He is the ultimate arbiter and his outlook is stamped on the show. "I am responsible for how the money is spent, I decide on directors and choose the scripts with the script editor Terrance Dicks."

The show, he says, is not run on a shoestring. What they are short of is time. "Twenty-five weekly shows cannot be done in 25 weeks. Outside filming and studio recordings have to be knitted together. The staff are wo king from July to May; it's only in June that there's no production work. But even then we are kept busy."

But Barry Letts is a patient man. "I am not the sort of person to find things a strain. The work isn't a strain because I enjoy it." And if things do get him riled he keeps calm on the surface "but I am churning like mad underneath".

For the first episodes of "Dr. Who" this year Barry Letts was both producer and director. A director's job is more "stressful" he believes. "You have to do so many things at the same time. But I enjoy directing because it is an extremely creative job. It stretches all your abilities artistically speaking."

Among many other programmes he has directed "Z Cars" episodes and was one of the first four directors for "The Doctors". But he started out in the entertainments business as an actor. He was 15 and had just taken his school certificate at Wyggeston School, Leicester - where he was a form-mate of Richard Attenborough - when he took a holiday job at Leicester's Royal Theatre.

"It was 19-- and I was in assistant stage manager in no time at all because everybody else had been called up. In fact I found myself running the show because the stage manager - a girl was acting. Lefore the seven weeks holiday was up I was acting as well, earning 10s. a week. I wanted to leave school and go into rep. My father said 'certainly not' the Headmaster said 'certainly not'.

"So I went to see the Director of Education because I thought everyone was being unfair. He intervened on my behall - perhaps foolishly - and persuaded them to let me leave. In some ways I regret it now. I wish I ha 1 gone to university"

After three years in repertory he made the film "San Demetrio, London," the wartime story of a cargo ship. He then went into the Navy and after two years became commanding officer of a motor launch

He was under contract to Ealing Studios at this time. "When I came out of the Navy 1 thought I was going to be a film star, but then Rank took over the contract artists. I was one of 40 in the departmen and one had heard of me. After two years we were all dropped."

"About 10 years ago I applied for a producers' and directors course but they turned me down flat. Not enough television experience they said. So I tried five years later and this time I got in."

He is evidently happy to be working on "Dr. Who" - just like the actors. For them it is regular and satisfying work with good money. For Barry Letts it often means taking scripts home with him to his wife Chummy and three children.

She was an actress that he met in rep and married soon after. Barry himself comes from a show business family. His sister Pauline is a well-known actress and his father Harry is a founder member of Leicester Drama Society, which owns the Little Theatre.

Now his ambition lies in a single handed show. "I want to write, produce an i direct a show of some consequence. I fulfilled this in miniature at the director's school when I did a 20-minute play. I suppose like a lot of people I would like to be Orson Wells"