The Men Behind the Monsters 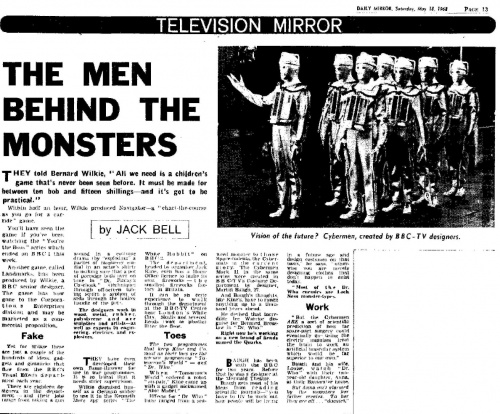 They told Bernard Wilkie, "All we need is a children's game that's never been seen before. It must be made for between ten bob at fifteen shillings and it's got to be practical.

Within half an hour, Wilkie produced Navigator-- a "chart-the-course as you go for a car ride" game.

You'll have seen the game if you've been watching "You're the Boss" series which ended on BBC 1 this week.

Another game, called Landmarks, has been produced by Wilkie, a BBC senior designer. The game has now gone to the Corporation's Enterprises division and may be marketed as a commercial proposition.

Yet for Wilkie of these are just a couple of the hundreds of ideas gadgets and gimmicks that flow from the BBC's Visual Effects department each year.

There are eighteen designers and the department and their jobs range from faking a gun wound in a costume drama by exploding a packet of raspberry cordial in and actor's shirt to making sure that a pot of porridge boils over on time in "Dr. Finley's Casebook." Techniques through off-scree [?] squirt a siphon of soda through the hollow handle of a pot.

The designers work in wood, metal, rubber, polystyrene and are sculptors and artists-- as well as experts in engineering, electrics, and explosives.

They have even developed their own flame thrower for use in war programmes. It is so lethal that it need strict supervision.

Wilkie disguised himself as a German soldier to use it in the Kenneth More spy series "The White Rabbit" on BBC 2.

The department, headed high organizer Jack Kine, even has a Home Office license to make its own fireworks-- the smallest fireworks factory in Britain.

It can be and hairy experience to walk through the department at the BBC-TV Centre near London's White City. Skulls and severed heads (wax or plastic) litter the floor.

The two programmes that keep Kine and Co most on their toes are the science program "Tomorrow's World" -- and "Dr. Who."

Effects for "Dr. Who" have ranged from a seaweed monster to those Space-rodents the Cybermats in the current story. The Cybermen Mark II in the same series were created in BBC-TV's costume department by designer Martin Baugh, 27.

And Baugh's thoughts like Kine's, have to range anything up to 1000 years ahead.

He devised that incredible Ice Warrior disguise for Bernard Bresslaw in "Dr. Who."

Right now he's working on a new brand of fiends named the quarks.

Baugh has been with the BBC for two years. Before that he was a designer at the Mermaid Theatre.

Baugh gets most of his ideas from reading scientific journals-- "you have to try to work out how people will be living in the future and design costumes on that basis," he says, "otherwise you are merely designing clothes that don't happen to the exist today.

Most of the Dr. Who enemies are Loch Ness monster-types.

But the Cybermen are a sort of scientific prediction of how far spare-part surgery could eventually go using the electrical impulses from the brain to work an artificial muscular system which would be far superior to our own."

Baugh and his wife, Louise, watch "Dr. Who" with their two-year old daughter, Anna, at their Bayswater home.

But Anna isn't alarmed by the monsters her father creates. To her there all ... "doggies."