The TARDIS principle: don't let time pass you by 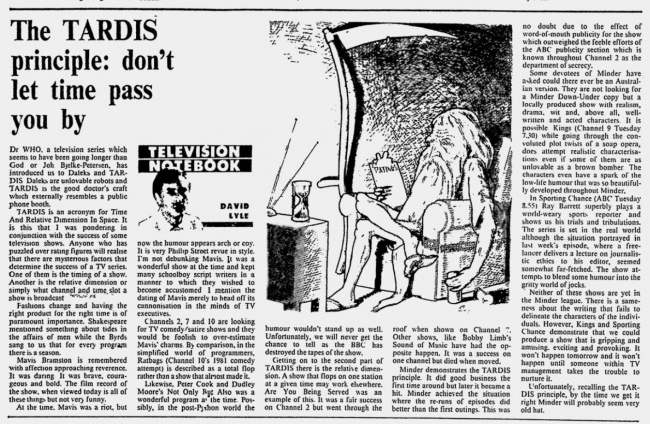 Dr WHO, a television series which seems to have been going longer than God or Joh Bjelke-Petersen, has introduced us to Daleks and TARDIS Daleks are unlovable robots and TARDIS is the good doctor's craft which externally resembles a public phone booth.

TARDIS is an acronym for Time And Relative Dimension In Space. It is this that I was pondering in conjunction with the success of some television shows. Anyone who has puzzled over rating figures will realise that there are mysterious factors that determine the success of a TV series. One of them is the timing of a show. Another is the relative dimension or simply what channel and time, slot a show is broadcast.

Fashions change and having the right product for the right time is of paramount importance. Shakespeare mentioned something about tides in the affairs of men while the Byrds sang to us that for every program there is a season.

Mavis Bramston is remembered with affection approaching reverence. It was daring It was brave. courageous and bold. The film record of the show, when viewed today is all of these things but not very funny.

At the time, Mavis was a riot, but now the humour appears arch or coy. It is very Phillip Street revue in style. I'm not debunking Mavis. It was a wonderful show at the time and kept many schoolboy script writers in a manner to which they wished to become accustomed I mention the dating of Mavis merely to head off its cannonisation in the minds of TV executives.

Channels 2, 7 and 10 arc looking for TV comedy/satire shows and they would be foolish to over-estimate Mavis' charms By comparison, in the simplified world of programmers, Ratbags (Channel 10's 1981 comedy attempt) is described as a total flop rather than a show that almost made it.

Likewise, Peter Cook and Dudley Moore's Not Only But Also was a wonderful program a, the time Possibly, in the post-Python world the humour wouldn't stand up as well. Unfortunately, we will never get the chance to tell as the BBC has destroyed the tapes of the show.

Getting on to the second part of TARDIS there is the relative dimension. A show that flops on one station at a given time may work elsewhere. Arc You Being Served was an example of this. It was a fair success on Channel 2 but went through the roof when shown on Channel Other shows, like Bobby Limb's Sound of Music have had the opposite happen. It was a success on one channel but died when moved.

Minder demonstrates the TARDIS principle. It did good business the first time around but later it became a hit. Minder achieved the situation where the re-runs of episodes did better than the first outings. This was no doubt due to the effect of word-of-mouth publicity for the show which outweighed the feeble efforts of the ABC publicity' section which is known throughout Channel 2 as the department of secrecy.

Some devotees of Minder have asked could there ever be an Australian version. They are not looking for a Minder Down-Under copy but a locally produced show with realism, drama, wit and, above all, well-v. town and acted characters It is possible Kings (Channel 9 Tuesday 7.30) while going through the convoluted plot twists of a soap opera, does attempt realistic characterisations even if some of them are as unlovable as a brown bomber The characters even have a spark of the low-life humour that was so beautifully developed throughout Minder.

In Sporting Chance (ABC Tuesday S.S5) Ray Barrett superbly plays a world-weary sports reporter and shows us his trials and tribulations. The series is set in the real world although the situation portrayed in last week's episode, where a freelancer delivers a lecture on journalistic ethics to his editor, seemed somewhat far-fetched. The show attempts to blend some humour into the gritty world of jocks.

Neither of these shows arc yet in the Minder league. There is a sameness about the writing that fails to delineate the characters of the individuals. However, Kings and Sporting Chance demonstrate that we could produce a show that is gripping and amusing, exciting and provoking. It won't happen tomorrow and it won't happen until someone within TV management takes the trouble to nurture it.

Unfortunately, recalling the TARDIS principle, by the time we get it right Minder will probably seem very old hat.