The Who Was Who in Dr Who 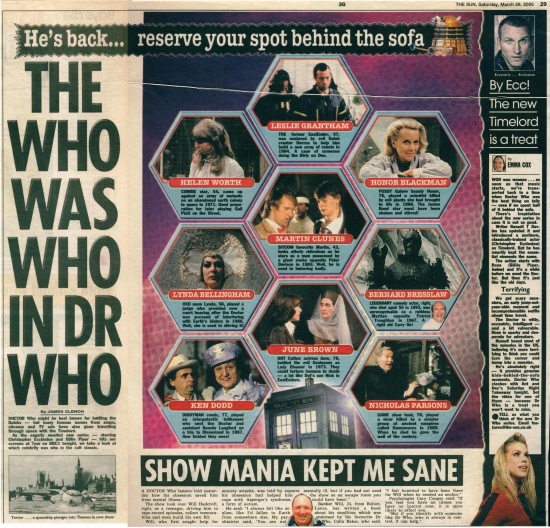 He's back... reserve your spot behind the sofa

DOCTOR Who might be best known for battling the Daleks — but many famous names from soaps, sitcoms and TV ads have also gone travelling through space with the Timelord.

As the eagerly awaited new series — starring Christopher Eccleston and Billie Piper — hits our screens at 7pm on BBC1 tonight, we take a look at which celebrity was who in the cult classic.

Caption: Terror ... a spaceship plunges into Thames in new show

CORRIE star, 54, came up against an army of mutants on an abandoned earth colony in space in 1971. Good preparation for later playing Gail Platt on the Street.

OXO mum Lynda, 56, played a judge who presided over a court hearing after the Doctor was accused of interfering with Earth's history in 1986. Well, she is used to stirring it!

DIDDYMAN comic, 77, played an intergalactic tollkeeper who sent the Doctor and assistant Bonnie Langford on a trip to Disneyland in 1987. How tickled they were!

THE former EastEnder, 57, was enslaved by evil Dalek creator Davros to help him build a new army of robots in 1984. A case of someone doing the Dirty on Den.

SITCOM favourite Martin, 43, looks utterly ridiculous as he stars as a man possessed by a giant snake opposite Peter Davison in 1983. Well, he is used to behaving badly.

DOT Cotton actress June, 78, battled the evil Sontarans as Lady Eleanor in 1973. They could torture humans to death — a lot like Dot's son Nick in EastEnders.

PUSSY Galore beauty Honor, 78, played a scientist killed by evil plants she had brought to life in 1986. The James Bond star must have been shaken and stirred!

LEGENDARY comedy actor, right, who died aged 59 in 1993, was unrecognisable as a ruthless Martian opposite Patrick Troughton in 1967. A right old Carry On!

GAME show host, 76, played a vicar killed by a sinister group of ancient vampires called Haemovores in 1989. When he died he gave the wail of the century.

By Ecc! The new Timelord is a treat

WOO woo wooooo ... as soon as that music starts, we're transported back to a time when Doctor Who was the best thing on telly — even if we spent half of it behind the sofa.

There's trepidation about the new series in case it is not so good.

Writer Russell T Davies has updated it and introduced a northern, classically-trained actor (Christopher Eccleston) as Timelord. But he has smartly kept the essential elements the same.

The action starts with Rose (Billie Piper, Wow) and it's a while before we meet the Doctor. But then it's just like the old days.

We get scary monsters, an early jump-out-your-skin moment and incomprehensible waffle about time travel.

The Doctor is witty, eccentric, intelligent —and a bit vulnerable. Rose is sparky and desperate for adventure.

Russell based most of the episodes in the UK, believing it's more terrifying to think you could turn the corner and bump into a monster.

He's absolutely right — it provides genuine hide-behind-the-sofa moments. Doctor Who clashes with Ant and Dec's Saturday Night Takeaway tonight. Set the video for one of them — because Dr Who is a treat you won't want to miss.

A DOCTOR Who fanatic told yesterday how his obsession saved him from mental illness.

The show took over Will Hadcroft, right, as a teenager. driving him to tape-record episodes, collect memorabilia and even build his own K9.

Will, who first sought help for anxiety attacks, was told by experts his obsession had helped him cope with Asperger's syndrome, a form of autism.

He said: "I always felt like an alien, like I'd fallen to Earth - from somewhere else. My psychiatrist said, 'You are not mentally ill. but if you had not used the show as an escape route you could have been'."

Banker Will, 34, from Bolton, Lancs, has written a book about his condition which was endorsed by his favourite Dr Who, Colin Baker, who said: "I feel humbled to have been there for Will when he needed an anchor."

Psychologist Cary Cooper said: "If you feel you have an illness you have no control over, it is more likely to affect you.

"But if you identify with someone like Dr Who, who is always in control, it can help."