The birth of the Daleks 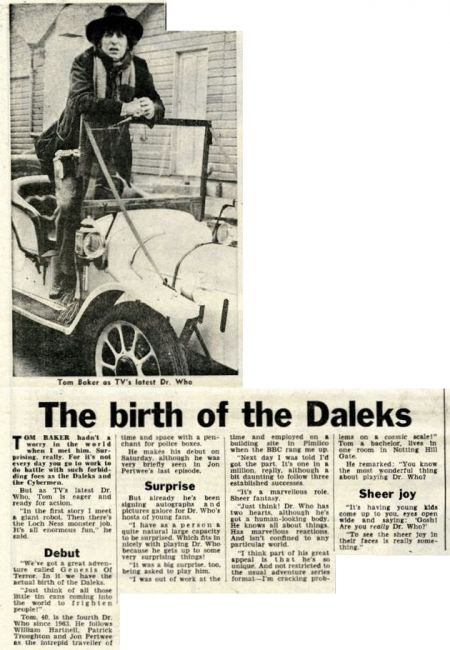 Tom Baker hadn't a worry In the wand when I met him. Surprising really. For it's not every day you go to work to do battle with such forbidding foes as the Daleks and the Cybermen.

But as TV's latest Dr. Who, Tom Is eager and ready for action.

"In the first story I meet a giant robot. Then there's the Loch Ness monster job. It's all enormous fun," he said.

"We've got great adventure called Genesis of Terror. In it we have the actual birth of the Daleks.

"Just think of all those little tin cans coming into the world to frighten people!"

Tom, 40, is the fourth Dr. Who since 1963. He follows William Hartnell, Patrick Troughton and Jon Pertwee as the intrepid traveller of time and space with a penchant for police boxes.

He makes his debut on Saturday, although he was very briefly seen in Jon Pertwee's last episode.

But already he's been signing autographs and pictures galore for Dr. Who's hosts of young fans.

"I have as a person a quite natural large capacity to be surprised. Which fits in nicely with playing Dr Who because he gets up to some very surprising things!

"It was a big surprise, too, being asked to play him.

"I was out of work at the time and employed on a building site in Pimlico when the BBC rang me up.

"Next day I was told I'd got the part. It's one in a million, really, although a bit daunting to follow three established successes.

"It's a marvellous role. Sheer fantasy.

"Just think! Dr. Who has two hearts, although he's got a human-looking body, He knows all about things. Has marvellous reactions. And isn't confined to any particular world.

"I think part of his great appeal is that he's so unique. And not restricted to the usual adventure series format - I'm cracking problems on a cosmic scale!" Tom a bachelor, lives in one room in Notting Hill Gate.

He remarked: "You know the most wonderful thing about playing Dr. Who?

"It's having young kids come up to you, eyes open wide and saying: 'Gosh! Are you really Dr. Who?'

"To are the sheer joy in their faces is really something'