The day a Cyberman went shopping in St. Pancras 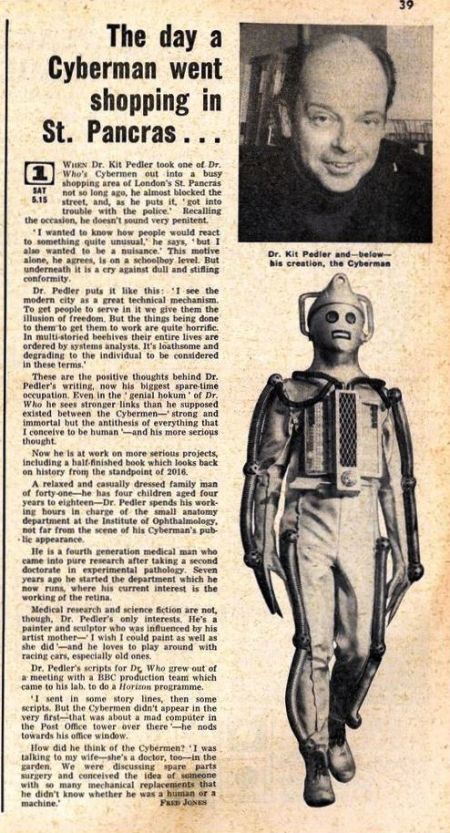 When Dr. Kit Pedler took one of Dr. Who's Cybermen out into a busy shopping area of London's St Pancras not so long ago. he almost blocked the street, and, as he puts It, 'got into trouble with the police.' Recalling the occasion. he doesn't sound very penitent.

'I wanted to know bow people would react to something quite unusual,' he says. 'but I also wanted to be a nuisance.' This motive alone, he agrees, is on a schoolboy level. But underneath it is a cry against dull and stifling conformity.

Dr Pedler puts it like this: 'I see the modern city as a great technical mechanism. To get people to serve in it we give them the illusion of freedom. But the things being done to them to get them to work are quite horrific. In multi-storied beehives their entire lives are ordered by systems analysts. It's loathsome and degrading to the individual to be considered in these terms.'

These are the positive thoughts behind Dr. Pedler's writing, now his biggest spare-time occupation. Even in the 'genial hokum' of Dr. Who he sees stronger links than he supposed existed between the Cybermen—- strong and immortal but the antithesis of everything that conceive to be human' —and his more serious thought.

Now he is at work on more serious projects, including a half-finished book which looks back on history from the standpoint of 2016.

A relaxed and casually dressed family man of forty-one—he has four children aged four years to eighteen—Dr. Pedler spends his working hours in charge of the small anatomy department at the Institute of Ophthalmology, not far from the scene of his Cyberman's pubic appearance.

He is a fourth generation medical man who came into pure research after taking a second doctorate In experimental pathology. Seven years ago he started the department which be now runs, where his current interest is the working of the retina.

Medical research and science fiction are not, though, Dr. Pedler's only Interests, lie's a painter and sculptor who was influenced by his artist mother— 'I wish I could paint as well as she did' —and he loves to play around with racing cars, especially old ones.

Dr. Pedler's scripts for Dr Who grew out of a meeting with a BBC production team which came to his lab to do a Horizon programme.

'I sent in some story lines, then some scripts. But the Cybermen didn't appear in the very first-that was about a mad computer in the Post Office tower over there' —he nods towards his office window.

How did he think of the Cybermen? 'I was talking to my wife—she's a doctor, too—in the garden. We were discussing spare parts surgery and conceived the idea of someone with so many mechanical replacements that he didn't know whether be was a human or a machine.'