The drift from tv to film features 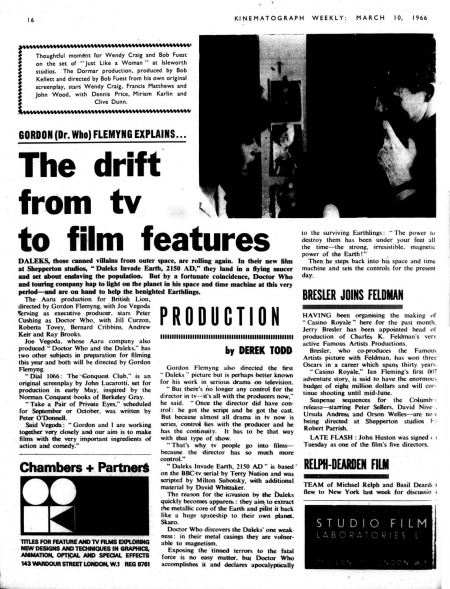 DALEKS, those canned villains from outer space, are rolling again. In their new film at Shepperton studios, "Daleks Invade Earth, 2150 AD," they land in a flying saucer and set about enslaving the population. But by a fortunate coincidence, Doctor Who and touring company hap to light on the planet in his space and time machine at this very period—and are on hand to help the benighted Earthlings.

Joe Vegoda, whose Aaru company also produced "Doctor Who and the Daleks." has two other subjects in preparation for filming this year and both will he directed by Gordon Flemyng.

"Dial 1066: The Conquest Club," is an original screenplay by John Lucarotti, set for production in early May, inspired by the Norman Conquest books of Berkeley Gray.

"Take a Pair of Private Eyes," scheduled for September or October. was written by Peter O'Donnell.

Said Vegoda: "Gordon and I are working together very closely and our aim is to make films with the very important ingredients of action and comedy."

Gordon Flemyng also directed the first Daleks" picture but is perhaps better known for his work in serious drama on television.

"That's why tv people go into films—because the director has so much more control."

"Daleks Invade Earth, 2150 AD" is based on the BBC-tv serial by Terry Nation and was scripted by Milton Subotsky, with additional material by David Whittaker.

The reason for the invasion by the Daleks quickly becomes apparent: they aim to extract the metallic core of the Earth and pain it back like a huge spaceship to their own planet, Skaro.

Doctor Who discovers the Daleks' one weakness: in their metal casings they are vulnerable to magnetism.

Exposing the tinned terrors to the fatal force is no easy matter, but Doctor Who accomplishes it and declares apocalyptically to the surviving Earthlings: "The power to destroy them has been under your feet all the time—the strong, irresistible, magnetic power of the Earth!"