The facts you should know about Dr Who 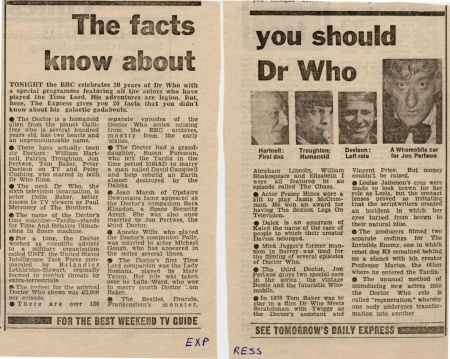 TONIGHT the BBC celebrates 20 years of Dr Who with a special programme featuring all the actors who have played the Time Lord. His adventures are legion. But, here, The Express gives you 20 facts that you didn't know about his galactic gadabouts.

• The Doctor is a humanoid alien from the planet Gallifrey who is several hundred years old, has two hearts and an unpronounceable name.

• There have actually been six Doctors : William Hartnell, Patrick Troughton, Jon Pertwee, Tom Baker, Peter Davison on TV and Peter Cushing, who starred in both Dr Who films.

• The next Dr Who, the sixth television incarnation, is actor Colin Baker, better known to TV viewers as Paul Merroney of The Brothers.

• The name of the Doctor's time machine—Tardis—stands for Time And Relative Dimensions In Space machine.

• For a time, the Doctor worked as scientific adviser to a military organisation called UNIT, the United States Intelligence Task Force commanded by Brigadier Lethbridge-Stewart, originally formed to combat threats by extra-terrestrials.

• The budget for the original Doctor Who shows was £2,000 per episode.

• There are over 130 separate episodes of the Doctor Who series missing from the BBC - archives, mostly from the early 'sixties.

• The Doctor had a granddaughter, Susan Foreman, who left the Tardis in the time period 2164AD to marry a man called David Campbell and help rebuild an Earth almost destroyed by the Daleks.

• Jean Marsh of Upstairs Downstairs fame appeared as the Doctor's companion Sara Kingdom, a Space Security Agent. She was also once married to Jon Pertwee, the third Doctor.

• Anneke Wills, who played the Doctor's companion Polly, was married to actor Michael Gough, who has appeared in the series several times.

• The Doctor's first Time Lord companion was the Lady Romana, played by Mary Tamm. Her role was taken over by Lalla Ward, who was to marry fourth Doctor Tom Baker.

• The Beatles, Dracula, Frankenstein's monster, Abraham Lincoln, William Shakespeare and Elizabeth I were all featured in an episode called The Chase.

• Actor Fraser Hines wore a kilt to play Jamie McCrimmon. He won an award for having The Sexiest Legs On Television.

• Dalek is an anagram of Kaled the name of the race of people to which their creator Davros belonged.

• Mick Jagger's former mansion in Surrey was used for the filming of several episodes of Doctor Who.

• The third Doctor, Jon Pertwee drove two special cars in the series : the vintage Bessie and the futuristic Who-mobile.

• In 1976 Tom Baker was to star in a film Dr Who Meets Scratchman with Twiggy as the Doctor's assistant and Vincent Price. But money couldn't be raised.

• Louise Jameson's eyes were made to look brown for her role as Leela, but the contact lenses proved so irritating that the scriptwriters created an incident in which her eyes turned from brown to their natural blue.

• The producers filmed two separate endings for The Invisible Enemy, one in which robot dog K9 remained behind on a planet with his creator Professor Marius, the other where he entered the Tardis.

• The unusual method of introducing new actors into the Doctor Who role is called "regeneration," whereby one body undergoes transformation into another

A Whomobile car for Jon Pertwee