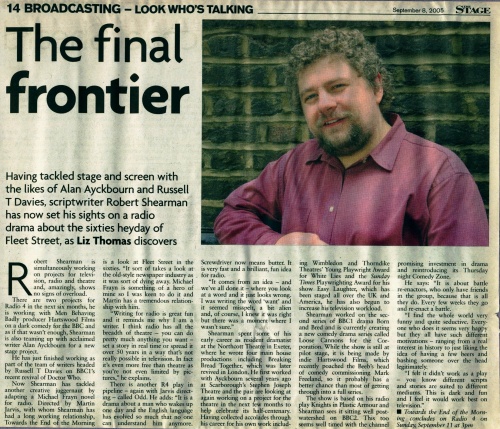 Having tackled stage and screen with the likes of Alan Ayckbourn and Russell T Davies, scriptwriter Robert Shearman has now set his sights on a radio drama about the sixties heyday of Fleet Street, as Liz Thomas discovers

Robert Shearman is simultaneously working on projects for television, radio and theatre and, amazingly, shows no signs of overload. There are two projects for Radio 4 in the next six months, he is working with Men Behaving Badly producer Hartswood Films on a dark comedy for the BBC and as if that wasn't enough, Shearman is also teaming up with acclaimed writer Alan Ayckbourn for a new stage project.

He has just finished working as part of the team of writers headed by Russell T Davies on BBC1's recent revival of Doctor Who.

Now Shearman has tackled another creative juggernaut by adapting a Michael Frayn novel for radio. Directed by Martin Jarvis, with whom Shearman has had a long working relationship, Towards the End of the Morning is a look at Fleet Street in the sixties. "It sort of takes a look at. the old-style newspaper industry as it was sort of dying away. Michael Frayn is something of a hero of mine so I was keen to do it and Martin has a tremendous relationship with him.

"Writing for radio is great fun and it reminds me why I am a writer. I think radio has all the breadth of theatre — you can do pretty much anything you want —set a story in real time or spread it over 50 years in a way that's not really possible in television. In fact it's even more free than theatre as you're not even limited by pictures," he explains.

There is another R4 play in pipeline — again with Jarvis directing — called Odd. He adds: "It is a drama about a man who wakes up one day and the English language has evolved so much that no one can understand him anymore. Screwdriver now means butter. It is very fast and a brilliant, fun idea for radio.

"It comes from an idea — and we've all done it — where you look at a word and it just looks wrong. I was writing the word 'want' and it seemed misspelt, a bit alien and, of course, I knew it was right but there was a moment where I wasn't sure."

Shearman spent some of his early career as resident dramatist at the Northcott Theatre in Exeter, where he wrote four main house productions including Breaking Bread Together, which was later revived in London. He first worked with Ayckbourn several years ago at Scarborough's Stephen Joseph Theatre and the pair are looking at again working on a project for the theatre in the next few months to help celebrate its half-centenary. Having collected accolades through his career for his own work including Wimbledon and Thorndike Theatres' Young Playwright Award for White Lies and the Sunday Times Playwrighting Award for his show Easy Laughter, which has been staged all over the UK and America, he has also begun to increase his television workload.

Shearman worked on the second series of BBC1 drama Born and Bred and is currently creating a new comedy drama series called Loose Cannons for the Corporation. While the show is still at pilot stage, it is being made by indie Hartswood Films, which recently poached the Beeb's head of comedy commissioning Mark Freeland, so it probably has a better chance than most of getting through into a full series.

The show is based on his radio play Knights in Plastic Armour and Shearman sees it sitting well post-watershed on BBC2. This too seems well timed with the channel promising investment in drama and reintroducing its Thursday night Comedy Zone.

He says: "It is about battle re-enactors, who only have friends in the group, because that is all they do. Every few weeks they go and re-enact a battle.

"I find the whole world very funny and quite seductive. Everyone who does it seems very happy but they all have such different motivations — ranging from a real interest in history to just liking the idea of having a few beers and bashing someone over the head legitimately.

"I felt it didn't work as a play — you know different scripts and stories are suited to different mediums. This is dark and fun and I feel it would work best on television."

Towards the End of the Morning concludes on Radio 4 on Sunday, September 11 at 3pm