The good fight for Dr. Who 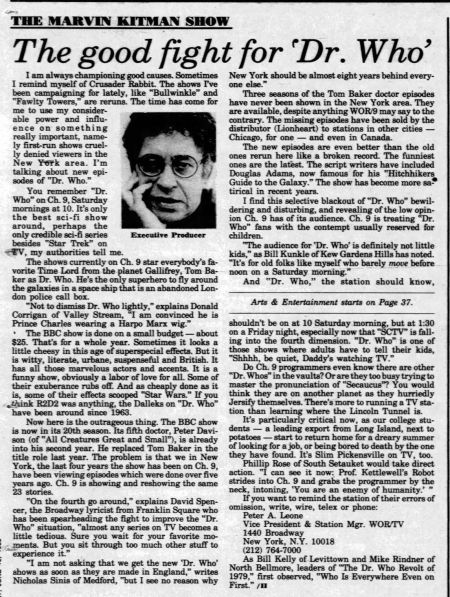 I am always championing good causes. Sometimes I remind myself of Crusader Rabbit. The shows I've been campaigning for lately, like "Bullwinkle" and "Fawlty Towers," are reruns. The time has come for me to use my considerable power and influence on something really important, namely first-run shows cruelly denied viewers in the New York area. I'm talking about new episodes of "Dr. Who."

You remember "Dr. Who" on Ch. 9, Saturday mornings at 10. It's only the best sci-fi show around, perhaps the only credible sci-fi series besides "Star Trek" on TV, my authorities tell me.

The shows currently on Ch. 9 star everybody's favorite Time Lord from the planet Gallifrey, Tom Baker as Dr. Who. He's the only superhero to fly around the galaxies in a space ship that is an abandoned London police call box.

"Not to dismiss Dr. Who lightly," explains Donald Corrigan of Valley Stream, "I am convinced he is Prince Charles wearing a Harpo Marx wig."

The BBC show is done on a small budget — about $25. That's for a whole year. Sometimes it looks a little cheesy in this age of superspecial effects. But it is witty, literate, urbane, suspenseful and British. It has all those marvelous actors and accents. It is a funny show, obviously a labor of love for all. Some of their exuberance rubs off. And as cheaply done as it is, some of their effects scooped "Star Wars." If you think R2D2 was anything, the Dalleks on "Dr. Who" have been around since 1963.

Now here is the outrageous thing. The BBC show is now in its 20th season. Its fifth doctor, Peter Davison (of "All Creatures Great and Small"), is already into his second year. He replaced Tom Baker in the title role last year. The problem is that we in New York, the last four years the show has been on Ch. 9, have been viewing episodes which were done over five years ago. Ch. 9 is showing and reshowing the same 23 stories.

"On the fourth go around," explains David Spencer, the Broadway lyricist from Franklin Square who has been spearheading the fight to improve the "Dr. Who" situation, "almost any series on TV becomes a little tedious. Sure you wait for your favorite moments. But you sit through too much other stuff to experience it."

"I am not asking that we get the new 'Dr. Who' shows as soon as they are made in England," writes Nicholas Sinis of Medford, "but I see no reason why New York should be almost eight years behind everyone else."

Three seasons of the Tom Baker doctor episodes have never been shown in the New York area. They are available, despite anything WOR/9 may say to the contrary. The missing episodes have been sold by the distributor (Lionheart) to stations in other cities —Chicago, for one — and even in Canada.

The new episodes are even better than the old ones rerun here like a broken record. The funniest ones are the latest. The script writers have included Douglas Adams, now famous for his "Hitchhikers Guide to the Galaxy." The show has become more satirical in recent years.

I find this selective blackout of "Dr. Who" bewildering and disturbing, and revealing of the low opinion Ch. 9 has of its audience. Ch. 9 is treating "Dr. Who" fans with the contempt usually reserved for children.

"The audience for 'Dr. Who' is definitely not little kids," as Bill Kunkle of Kew Gardens Hills has noted. "It's for old folks like myself who barely move before noon on a Saturday morning."

And "Dr. Who," the station should know, shouldn't be on at 10 Saturday morning, but at 1:30 on a Friday night, especially now that "SCTV" is falling into the fourth dimension. "Dr. Who" is one of those shows where adults have to tell their kids. "Shhhh, be quiet, Daddy's watching TV."

Do Ch. 9 programmers even know there are other "Dr. Whos" in the vaults? Or are they too busy trying to master the pronunciation of "Secaucus"? You would think they are on another planet as they hurriedly Jersify themselves. There's more to running a TV station than learning where the Lincoln Tunnel is.

It's particularly critical now, as our college students — a leading export from Long Island, next to potatoes — start to return home for a dreary summer of looking for a job, or being bored to death by the one they have found. It's Slim Pickensville on TV, too.

Phillip Rose of South Setauket would take direct action. "I can see it now: Prof. Kettlewell's Robot strides into Ch. 9 and grabs the programmer by the neck, intoning, 'You are an enemy of humanity.'"

If you want to remind the station of their errors of omission, write, wire, telex or phone:

As Bill Kelly of Levittown and Mike Rindner of North Bellmore, leaders of "The Dr. Who Revolt of 1979," first observed, "Who Is Everywhere Even on First."