The metamorphoses of Who 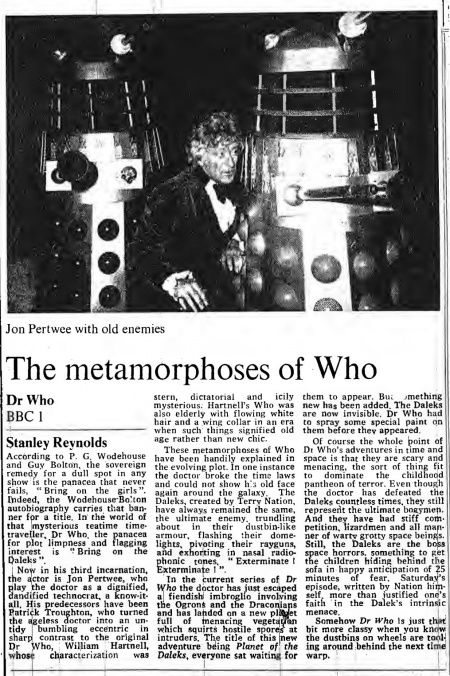 According to P. G. Wodehouse and Guy Bolton, the sovereign remedy for a dull spot in any show is the panacea that never fails, "Bring on the girls". Indeed, the Wodehouse-Bo!ton autobiography carries that banner for a title. In the world of that mysterious teatime time-traveller, Dr Who, the panacea for plot limpness and flagging interest is "Bring on the Daleks".

Now in his third incarnation, the actor is Jon Pertwee, who play the doctor as a dignified, dandified technocrat, a know-it-all. His predecessors have been Patrick Troughton, who turned the ageless doctor into an untidy bumbling eccentric in sharp ontrast to the original Dr Who, William Hartnell, whose haracterization was stern, dictatorial and icily mysterious. Hartnell's Who was also elderly with flowing white hair and a wing collar in an era when such things signified old age rather than new chic.

These metamorphoses of Who have been handily explained in the evolving plot. In one instance the doctor broke the time laws and could not show his old face again around the galaxy. The Daleks, created by Terry Nation, have always remained the same, the ultimate enemy, trundling about in their dustbin-like armour, flashing their dome-lights, pivoting their rayguns, and exhorting in nasal radio-phonic tones, "Exterminate ! Exterminate!".

In the current series of Dr Who the doctor has just escaped a fiendish imbroglio involving the Ogrons and the Draconians and has landed on a new planet full of menacing vegetation which squirts hostile spores at intruders, The title of this new adventure being Planet of the Daleks, everyone sat waiting for them to appear. But something new has been added. The Daleks are now invisible, Dr Who had to spray some special paint on them before they appeared.

Of course the whole point of Dr Who's adventures in time and space is that they are scary and menacing, the sort of thing fit to dominate the childhood pantheon of terror. Even though the doctor has defeated the Daleks countless times, they still represent the ultimate bogeymen. And they have had stiff competition, lizardmen and all manner of warty grotty space beings. Still, the Daleks are the boss space horrors, something to get the children hiding behind the sofa in happy anticipation of 25 minutes of fear. Saturday's episode, written by Nation himself, more than justified one's faith in the Dalek's intrinsic menace.

Somehow Dr Who is just that bit more classy when you knew the dustbins on wheels are tooling around behind the next time warp.