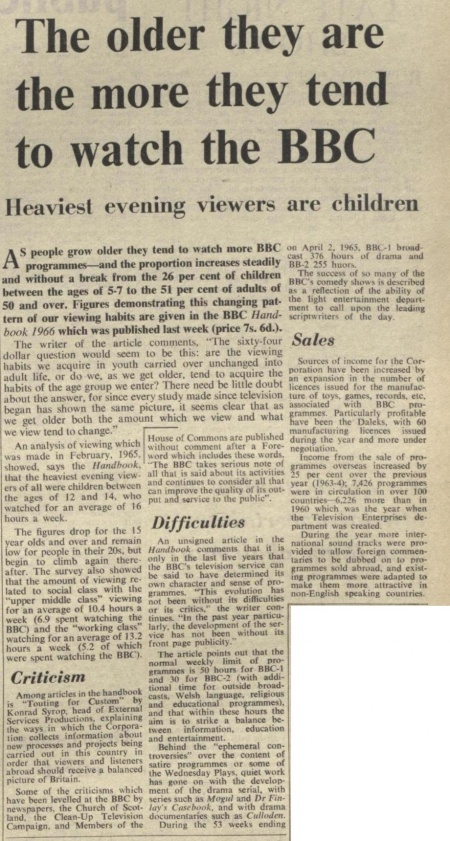 AS people grow older they tend to watch more BBC programmes—and the proportion increases steadily and without a break from the 26 per cent of children between the ages of 5-7 to the 51 per cent of adults of 50 and over. Figures demonstrating this changing pattern of our viewing habits are given in the BBC Handbook 1966 which was published last week (price 7s. 6d.).

The writer of the article comments, "The sixty-four dollar question would seem to be this: are the viewing habits we acquire in youth carried over unchanged into adult life, or do we, as we get older, tend to acquire the habits of the age group we enter? There need be little doubt about the answer, for since every study made since television began has shown the same picture, it seems clear that as we get older both the amount which we view and what we view tend to change."

An analysis of viewing which was made in February. 1965. showed, says the Handbook, that the heaviest evening viewers of all were children between the ages of 12 and 14, who watched for an average of 16 hours a week.

The figures drop for the 15 year olds and over and remain low for people in their 20s, but begin to climb again thereafter. The survey also showed that the amount of viewing related to social class with the "upper middle class" viewing for an average of 10.4 hours a week (6.9 spent watching the BBC) and the "working class" watching for an average of 13.2 hours a week (5.2 of which were spent watching the BBC).

Among articles in the handbook is "Touting for Custom" by Konrad Syrup, head of External Services Productions. explaining the ways in which the Corporation collects information about new processes and projects being carried out in this country in order that viewers and listeners abroad should receive a balanced picture of Britain.

Some of the criticisms which have been levelled at the BBC by newspapers, the Church of Scotland, the Clean-Up Television Campaign. and Members of the House of Commons are published without comment after a Foreword which includes these words, "The BBC takes serious note of all that is said about its activities and continues to consider all that can improve the quality of its output and service to the public".

An unsigned article in the Handbook comments that it is only in the last five years that the BBC's television service can be said to have determined its own character and sense of programmes. 'This evolution has not been without its difficulties or its critics." the writer continues. "In the past year particularly, the development of the service has not been without its front page publicity.-

The article points out that the normal weekly limit of programmes is 50 hours for BBC-1 and 30 for BBC-2 (with additional time for outside broadcasts. Welsh language, religious and educational programmes). and that within these hours the aim is to strike a balance between information, education and entertainment.

Behind the "ephemeral controversies" over the content of satire programmes or some of the Wednesday Plays, quiet work has gone on with the development of the drama serial, with series such as Mogul and Dr Finlay's Casebook, and with drama documentaries such as Culloden.

The success of so many of the BBC's comedy shows is described as a reflection of the ability of the light entertainment department to call upon the leading scriptwriters of the day.

Sources of income for the Corporation have been increased by an expansion in the number of licences issued for the manufacture of toys, games, records, etc. associated with BBC programmes. Particularly profitable have been the Daleks, with 60 manufacturing licences issued during the year and more under negotiation.

Income from the sale of programmes overseas increased by 25 per cent over the previous year (1963-4); 7,426 programmes were in circulation in over 100 countries-6,226 more than in 1960 which was the year when the Television Enterprises department was created.

During the year more international sound tracks were provided to allow foreign commentaries to be dubbed on to programmes sold abroad, and existing programmes were adapted to make them more attractive in non-English speaking countries.