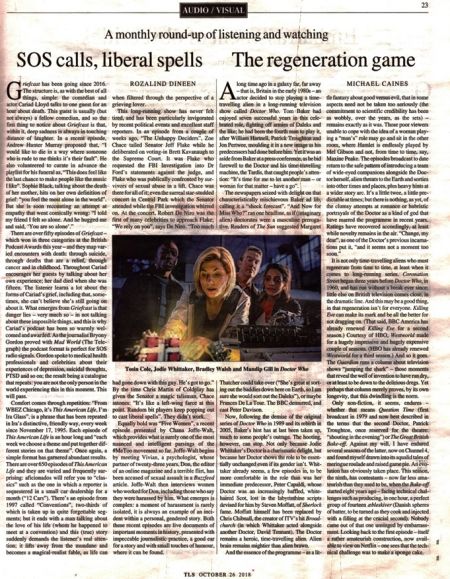 A long time ago in a galaxy far, far away — that is, Britain in the early 1980s — an tor decided to stop playing a time-travelling alien in a long-running television show called Doctor Who. Tom Baker had enjoyed seven successful years in this celebrated role, fighting off armies of Daleks and the like; he had been the fourth man to play it, after William Hartnell, Patrick Troughton and Jon Pertwee, moulding it in a new image as his predecessors had done before him. Yet it was an aside from Baker at a press conference, as he bid farewell to the Doctor and his time-travelling machine, the Tardis, that caught people's attention: "It's time for me to let another4 manor woman for that matter — have a go".

The newspapers seized with delight on that characteristically mischievous Baker ad lib, calling it a "shock forecast". "And Now for Miss Who?" ran one headline, as if (imaginary alien) doctorates were a masculine prerogative. Readers of The Sun suggested Margaret

Thatcher could take over ("She's great at sorting out the baddies down here on Earth, so I am sure she would sort out the Daleks"), or maybe Frances De La Tour. The BBC demurred, and cast Peter Davison.

Now, following the demise of the original series of Doctor Who in 1989 and its rebirth in 2005, Baker's hint has at last been taken up, much to some people's outrage. The hooting, however, can stop. Not only because Jodie Whittaker's Doctor is a charismatic delight, but because her Doctor shows the role to be essentially unchanged even if its gender isn't. Whittaker already seems, a few episodes in, to be more comfortable in the role than was her immediate predecessor, Peter Capaldi, whose Doctor was an increasingly baffled, white-haired Scot, lost in the labyrinthine scripts devised for him by Steven Moffatt, of Sherlock fame. Moffatt himself has been replaced by Chris Chibnall, the creator of ITV's hit Broad-church (in which Whittaker acted alongside another Doctor, David Tennant). The Doctor remains a heroic, time-travelling alien. Alien brain remains mightier than alien brawn.

And the essence of the programme — as a little fantasy about good versus evil, that in some aspects need not be taken too seriously (the commitment to scientific credibility has been as wobbly, over the years, as the sets) —remains exactly as it was. Those poor viewers unable to cope with the idea of a woman playing a "man's" role may go and sit in the other room, where Hamlet is endlessly played by Mel Gibson and not, from time to time, say, Maxine Peake. The episodes broadcast to date return to the safe pattern of introducing a team of wide-eyed companions alongside the Doctor herself, alien threats to the Earth and sorties into other times and places, plus heavy hints at a wider story arc. It's a little twee, a little predictable at times; but there is nothing, as yet, of the clumsy attempts at romance or hubristic portrayals of the Doctor as a kind of god that have marred the programme in recent years. Ratings have recovered accordingly, at least while novelty remains in the air. "Change, my dear", as one of the Doctor's previous incarnations put it, "and it seems not a moment too soon."

It is not only time-travelling aliens who must regenerate from time to time, at least when it comes to long-running series. Coronation Street began three years before Doctor Who, in 1960, and has run without a break ever since; little else on British television comes close, in the dramatic line. And this may be a good thing, in that regeneration isn't for everyone. Killing Eve can make its mark and be all the better for not dragging on. (That said, BBC America has already renewed Killing Eve for a second season.) Courtesy of HBO, Westworld made for a hugely impressive and hugely expensive couple of seasons. (HBO has already renewed Westworld for a third season.) And so it goes. The Guardian runs a column about television shows "jumping the shark" — those moments that reveal the well of invention to have run dry, or at least to be down to the delirious dregs. Yet perhaps that column merely proves, by its own longevity, that this dwindling is the norm.

Only non-fiction, it seems, endures —whether that means Question Time (first broadcast in 1979 and now best described in the terms that the second Doctor, Patrick Troughton, once reserved for the theatre: "shouting in the evening") or The Great British Bake-off Against my will, I have endured several seasons of the latter, now on Channel 4, and found myself drawn into its squalid tales of meringue roulade and raised game pie. An evolution has obviously taken place. This season, the ninth, has contestants — now far less amateurish than they used to be, when the Bake-off started eight years ago — facing technical challenges such as producing, in one hour, a perfect group of fourteen æbleskiever (Danish spheres of batter, to be turned as they cook and injected with a filling at the crucial second). Nobody came out of that one unsinged by embarrassment. Looking back to the first episode — itself a rather amateurish construction, now available to view on Netflix — one sees that the technical Challenge was to make a sponge cake.