The screen stars with inhuman appeal 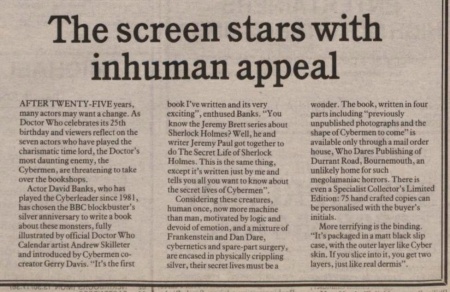 AFTER TWENTY-FIVE years, many actors may want a change. As Doctor Who celebrates its 25th birthday and viewers reflect on the seven actors who have played the charismatic time lord, the Doctor's most daunting enemy, the Cybermen, are threatening to take over the bookshops.

Actor David Banks, who has played the Cyberleader since 1981, has chosen the BBC blockbuster's silver anniversary to write a book about these monsters, fully illustrated by official Doctor Who Calendar artist Andrew Skilleter and introduced by Cybermen co-creator Gerry Davis. "It's the first book I've written and its very exciting", enthused Banks. "You know the Jeremy Brett series about Sherlock Holmes? Well, he and writer Jeremy Paul got together to do The Secret Life of Sherlock Holmes. This is the same thing, except it's written just by me and tells you all you want to know about the secret lives of Cybermen".

Considering these creatures, human once, now more machine than man, motivated by logic and devoid of emotion, and a mixture of Frankenstein and Dan Dare, cybernetics and spare-part surgery, arc encased in physically crippling silver, their secret lives must be a wonder. The book, written in four parts including "previously unpublished photographs and the shape of Cybermen to come" is available only through a mail order house, Who Dares Publishing of Durrant Road. Bournemouth, an unlikely home for such megolamaniac horrors. There is even a Specialist Collector's Limited Edition: 75 hand crafted copies can be personalised with the buyer's initials.

More terrifying is the binding. "It's packaged in a matt black slip case, with the outer layer like Cyber skin. If you slice into it, you get two layers, just like real dermis".