The true eccentric who was born to be Dr Who 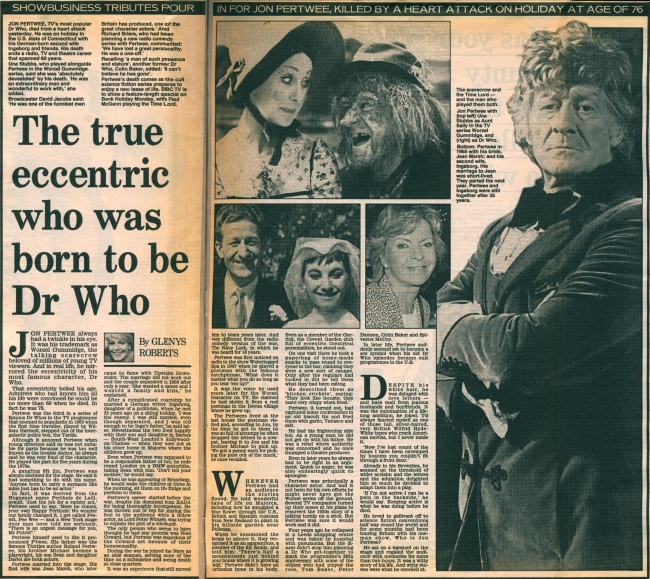 SHOWBUSINESS TRIBUTES POUR IN FOR JON PERTWEE, KILLED BY A HEART ATTACK ON HOLIDAY AT AGE OF 76

JON PERTWEE, TV's most popular Dr Who, died from a heart attack yesterday. He was on holiday In the U.S. state of Connecticut with his German-born second wife Ingeborg and friends. His death ends a radio, TV and theatre career that spanned 60 years.

Una Stubbs, who played alongside Pertwee in the Worzel Gummidge series, said she was 'absolutely devastated' by his death. 'He was an extraordinary man and wonderful to work with,' she added.

Broadcaster David Jacobs said: 'He was one of the funniest men Britain has produced, one (of the great character actors.' And Richard Briers, who had been planning a new radio comedy series with Pertwee, commented: 'We have lost a great personality. He was a one-off.'

Recalling 'a man of such prresence and stature', another former Dr Who, Colin Baker, added: can't believe he has gone'.

JON PERTWEE always had a twinkle in his eye. It was his trademark as Worzel Gummidge, the talking scarecrow beloved of millions of young TV viewers. And in real life, he mirrored the eccentricity of his most famous character, Dr Who.

That eccentricity belied his age. Admirers who had known him all his life were convinced he could be no more than 60 when he died. In fact he was 76.

Pertwee was the third in a series of famous Dr Whos in the TV programme that zoomed to popularity in 1963 when the first time traveller, played by William Hartnell, stepped out of the intergalactic police box, the Tardis.

Although it annoyed Pertwee when young directors said he was not suitable for parts because he was too well known as the lovable doctor, he always said he was very fond of the character. He played the part for five years during the 1970s.

A gangling 6ft 2in, Pertwee was always destined for the stage. He said it had something to do with his name. 'Anyone born to carry a surname like mine just has to be an actor.'

In fact, it was derived from the Huguenot name Perthuis de Lainavault. 'Just the job for a variety act,' Pertwee used to say. 'Here he comes, your own Happy Perthuis! No wonder our family changed it. I get called Peewit, Pee Wee — and a New York stage door man once told me seriously, "There is an urgent message for you, Mr Putrid".'

Pertwee himself used to like it pronounced P'twee. His father was the famous Thirties author Roland Pertwee, his brother Michael became a playwright, his son Sean and daughter Dariel are both actors.

Pertwee married into the stage. His first wife was Jean Marsh, who later came to fame with Upstairs Downstairs. The marriage did not work out and the couple separated in 1956 after only a year. 'She wanted a career and I wanted a family and kids,' he explained.

After a complicated courtship he married a German writer Ingeborg, daughter of a politician, whom he met 35 years ago on a skiing holiday. 'I was the enemy. I was still married, even though separated, and I was old enough to be Inge's father, he said later. Nevertheless the two Wed happily with their son and daughter in Barnes — South-West London's Hollywood-on-Thames — when they were not at his other home in Majorca where the children grew up.

Even when Pertwee was supposed to be a responsible father of two, he rode round London on a BMW motorbike, taking Sean with him. 'Don't tell your mother,' he would say.

When he was appearing on Broadway, he would wake the children at three in the morning, sit them on the fridge and perform to them.

Pertwee's career started before the war, despite his dismissal torn RADA for being thoroughly incompetent. He was thrown out of rep for playing the fool to the audience wile a fellow actor, as Lord Peter Wimsey, was trying to explain the plot of a whodunit.

The only person who seems to have thought he had any promise was Noel Coward, but Pertwee was suspicious of the Coward set because of their homosexuality.

During the war he joined the Navy as an able seaman, serving some of the time on a submarine and seeing death at close quarters.

It was an experience that still moved him to tears years later. And very different from the radio comedy version of the war, The Navy Lark, in which he was heard for 18 years.

Pertwee was first noticed on radio in the show Waterlogged Spa in 1947 when he played a postman with the famous catchphrase, 'What does it matter what you do so long as you tear 'em up?'

It was the voice he used years later for the Worzel character on TV. He claimed he had stolen it from a real postman in the Devon village where he grew up.

The Pertwees lived at the last house the postman visited and, according to Jon, by the time he got to them he was so full of scrumpy he often dropped the letters in a cow-pat, leaving it to Jon and his brother Michael to pick up. 'We got a penny each for picking the post out of the muck,' he once recalled.

HENEVER Pertwee had an audience the stories flowed. He told wonderful tales of life on Majorca, including how he smuggled a blue flower through the U.S., British and Spanish customs from New Zealand to plant in his hillside garden near Pollensa.

When he summoned the locals to admire it, they recognised it as an agapanthus, a member of the lily family, and told him: 'There's half a mountainside just behind your house where it is growing wild.' Pertwee didn't have an orthodox bone in his body. Even as a member of the Garrick. the Covent Garden club full of eccentric theatrical personalities, he stood out.

On one visit there he took a paperbag of home-made snacks to pass round to everyone in the bar, claiming they were a new sort of canape. Only after the regulars had tucked in did he tell them what they had been eating.

He described them as 'kitchen crickets', saying: 'They look like locusts; they taste very crispy when fried.'

Pertwee, it turned out, had captured some cockroaches in an old biscuit tin and fried them with garlic, Tabasco and salt.

He had his frightening side too. As a young man he did not get on with his father. He was a rebel where authority was concerned and he once thumped a theatre producer.

Even in later years he always had to be right in an argument. Quick to anger, he was also endearingly quick to apologise.

Pertwee was principally a character actor. And had it not been for his own efforts he might never have got the Worzel series off the ground. Several TV companies turned up their noses at his plans to resurrect the 1930s story of a talking turnip on a stick. But Pertwee was sure it would work and it did.

Four years ago he collapsed in a Leeds shopping centre and was taken to hospital with pneumonia. But the illness didn't stop him planning a Dr Who get-together to mark the programme's 30th anniversary with some of the others who had played the role, Tom Baker, Peter Davison, Colin Baker and Sylvester McCoy.

In later life, Pertwee suddenly seemed set to become a sex symbol when his old Dr Who episodes became cult programmes in the U.S.

DESPITE his white hair, he was deluged with love letters — and hate mail from jealous husbands and boyfriends. It was the culmination of a lifelong ambition, he joked. 'I'd always fancied myself as one of those tall, silver-haired, very British Wilfrid Hyde-White types who crack American movies, but I never made it.

'Now I've lost count of the times I have been enveloped by bosoms you couldn't fit through a front door.'

Already in his Seventies, he seemed on the threshold of wider acclaim and the letters and the adulation delighted him so much he decided to adapt them into a play.

'If I'm not active I can be a pain in the backside,' he would say. Keeping active is what he was doing before he died.

He loved to gallivant off to science fiction conventions half way round the world and for some months had been touring Britain with his one-man show, Who is Jon Pertwee?

He sat on a barstool on the stage and regaled the audience with memories for more than two hours. It was a witty story of his life. And witty stories were what he excelled at.

The scarecrow and the Time Lord —and the man who played them both.

Jon Pertwee with (top left) Una Stubbs as Aunt Sally In the TV series Worzel Gummidge, and (right) as Dr Who.

Bottom: Pertwee in 1955 with his bride, Jean Marsh; and his second wife, Ingeborg. His marriage to Jean was short-lived. They parted the next year. Pertwee and Ingeborg were still together after 35 years.