The what and where of 'Dr. Who' 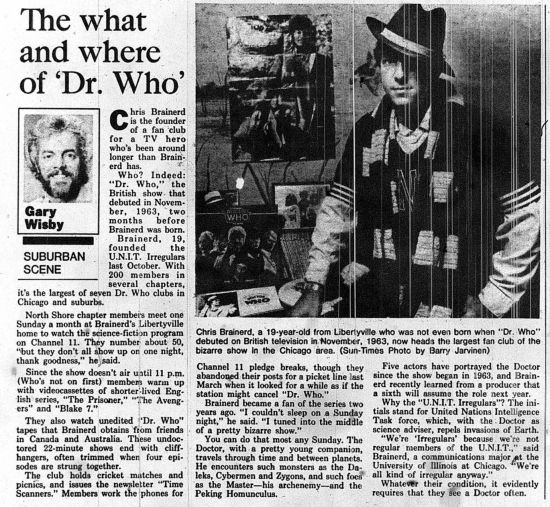 Chris Brainerd is the founder of a fan club for a TV hero who's been around longer than Brainerd has.

Who? Indeed: "Dr. Who," the British show that debuted in November, 1963, two months before Brainerd was born. Brainerd, 19, founded the U.N.I.T. Irregulars last October. With 200 members in several chapters, it's the largest of seven Dr. Who clubs in Chicago and suburbs.

North Shore chapter members meet one Sunday a month at Brainerd's Libertyville home to watch the science-fiction program on Channel 11. They number about 50, "but they don't all show up on one night, thank goodness," he said.

Since the show doesn't air until 11 p.m. (Who's not on first) members warm up with videocassettes of shorter-lived English series, "The Prisoner," The Avengers" and "Blake 7."

They also watch unedited 'Dr. Who" tapes that Brainerd obtains from friends in Canada and Australia. These undoctored 22-minute shows end with cliffhangers, often trimmed when four episodes are strung together.

The club holds cricket matches and picnics, and issues the newsletter "Time Scanners." Members work the phones for Channel 11 pledge breaks, though they abandoned their posts for a picket line last March when it looked for a while as if the station might cancel "Dr. Who." Brainerd became a fan of the series two years ago. "I couldn't sleep one Sunday night," he said. "I tuned into the middle of a pretty bizarre show."

You can do that most any Sunday. The Doctor, with a pretty young companion, travels through time and between planets. He encounters such monsters as the Daleks, Cybermen and Zygons, and such foes as the Master—his archenemy—and the Peking Homunculus.

Five actors have portrayed the Doctor since the show began in 1963, and Brainerd recently learned from a producer that sixth will assume the role next year. Why the "U.N.I.T. Irregulars"? The initials stand for United Nations Intelligence Task force, which, with the Doctor as science adviser, repels invasions of Earth. "We're 'Irregulars' because were not regular members of the U.N.I.T.," said Brainerd, a communications major at the University of Illinois at Chicago. "Were all kind of irregular anyway."

Whatever their condition, it evidently requires that they see a Doctor often.

Caption: Chris Brainerd, a 19-year-old from Libertyville who was not even born when "Dr. Who" debuted on British television in November, 1963, now heads the largest fan club of the bizarre show in the Chicago area.