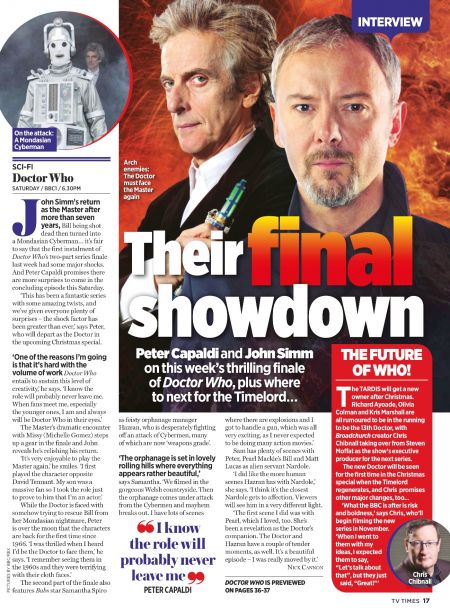 Peter Capaldi and John Simm on this week's thrilling finale of Doctor Who, plus where to next for the Timelord...

John Simm's return as the Master after more than seven years, Bill being shot dead then turned into a Mondasian Cyberman... it's fair to say that the first instalment of Doctor Who's two-part series finale last week had some major shocks. And Peter Capaldi promises there are more surprises to come in the concluding episode this Saturday.

'This has been a fantastic series with some amazing twists, and we've given everyone plenty of surprises - the shock factor has been greater than ever; says Peter, who will depart as the Doctor in the upcoming Christmas special.

'One of the reasons I'm going is that it's hard with the volume of work Doctor Who entails to sustain this level of creativity,' he says. 'I know the role will probably never leave me. When fans meet me, especially the younger ones, I am and always will be Doctor Who in their eyes.'

The Master's dramatic encounter with Missy (Michelle Gomez) steps up a gear in the finale and John reveals he's relishing his return.

'It's very enjoyable to play the Master again,' he smiles. 'I first played the character opposite David Tennant. My son was a massive fan so I took the role just to prove to him that I'm an actor.'

While the Doctor is faced with somehow trying to rescue Bill from her Mondasian nightmare, Peter is over the moon that the characters are back for the first time since 1966. 'I was thrilled when I heard I'd be the Doctor to face them,' he says. 'I remember seeing them in the 1960s and they were terrifying with their cloth faces.'

The second part of the finale also features Babs star Samantha Spiro as feisty orphanage manager Hazran, who is desperately fighting off an attack of Cybermen, many of which are now 'weapons grade.'

'The orphanage is set in lovely rolling hills where everything appears rather beautiful,' says Samantha. 'We filmed in the gorgeous Welsh countryside. Then the orphanage comes under attack from the Cybermen and mayhem breaks out. I have lots of scenes where there are explosions and I got to handle a gun, which was all very exciting, as I never expected to be doing many action movies:

'I did like the more human scenes Hazran has with Nardole; she says. think it's the closest Nardole gets to affection. Viewers will see him in a very different light.

The first scene I did was with Pearl, which I loved, too. She's been a revelation as the Doctor's companion. The Doctor and Hazran have a couple of tender moments, as well. It's a beautiful episode - I was really moved by it:

DOCTOR WHO IS PREVIEWED ON PAGES 36-37

Caption: Arch enemies: The Doctor must face the Master again

Caption: On the attack: A Mondasian Cyberman

THE FUTURE OF WHO!

The TARDIS will get a new owner after Christmas. Richard Ayoade, Olivia Colman and Kris Marshall are all rumoured to be in the running to be the 13th Doctor, with Broadchurch creator Chris Chibnall taking over from Steven Moffat as the show's executive producer for the next series.

The new Doctor will be seen for the first time in the Christmas special when the Timelord regenerates, and Chris promises other major changes, too...

'What the BBC is after is risk and boldness,' says Chris, who'll begin filming the new series in November. 'When I went to them with my ideas, I expected them to say,