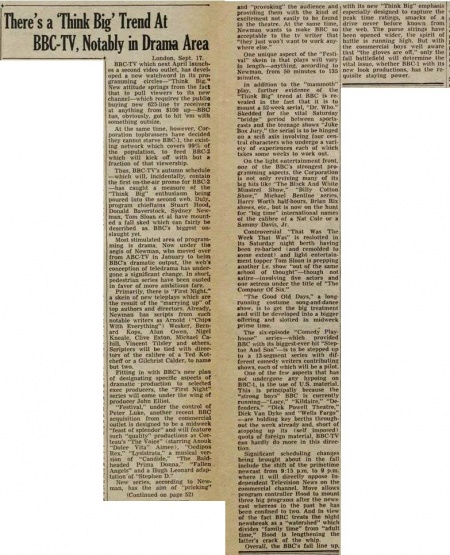 BBC-TV which next April launches a second video outlet, has developed a new watchword in its programming circles—"Think Big." New attitude springs from the fact that to pull viewers to its new channel—which requires the public buying new 625-line tv receivers at anything from $100 up—BBC has, obviously got to hit 'em with something outsize.

At the same time, however, Corporation topbrassers have decided they cannot starve BBC-1, the existing network which covers 99% of the population, to feed BBC-2 which will kick off with but a fraction of that viewership.

Thus, BBC-TV's autumn schedule — which will, incidentally, contain the first on-the-air promo for BBC-2 — has caught a measure of the "Think Big" enthusiasm being poured into the second web. Duly, program chieftains Stuart Hood, Donald Baverstock, Sydney Newman, Tom Sloan et al have mounted a fall sked which can fairly be described as BBC's biggest onslaught yet.

Most stimulated area of programming is drama. Now under the aegis of Newman, who moved over from ABC-TV in January to helm BBC's dramatic output, the web's conception of teledrama has undergone a significant change. In short, pedestrian series have been ousted in favor of more ambitious fare.

Primarily, there is "First Night," a skein of new teleplays which are the result of the "marrying up" of top authors and directors. Already. Newman has scripts from such notable writers as Arnold ("Chips With Everything") Wesker, Bernard Kops, Alun Owen, Nigel Kneale, Clive Exton, Michael Cahill, Vincent Titsley and others. Scripters will be tied with directors of the calibre of a Ted Kotcheff or a Gilchrist Calder, to name but two.

Fitting in with BBC's new plan of designating specific aspects of dramatic production to selected exec producers, the "First Night" series will come under the wing of Producer John Elliot.

"Festival," under the control of Peter Luke, another recent BBC acquisition from the commercial outlet is designed to be a midweek "feast of splendor" and will feature such "quality" productions an Cocteau's "The Voice" (starring Anouk "Dolce Vita" Aimee, "Oedipus Rex," "Lysistrata." a musical version of "Candide," The Baldheaded Prima Donna," "Fallen Angels" and a Hugh Leonard adaptation of "Stephen D."

New series, according to Newman, has the aim of "pricking" and "provoking" the audience and providing them with the kind of excitement not easily to be found In the theatre. At the same time, Newman wants to make BBC so acceptable to the tv writer that "they just won't want to work anywhere else"

One unique aspect of the "Festival" skein is that plays will vary in length—anything, according to Newman, from 50 minutes to 135 minutes.

In addition to the "mammoth" play, further evidence of the 'Think Big" trend at BBC is revealed in the fact that it is to mount a 52-week serial, "Dr. Who." Skedded for the vital Saturday "bridge period between sports casts and the teenage shows "Juke Box Jury," the serial is to be hinged on a scifi axis involving four central characters who undergo a variety of experiences each of which takes some weeks to work out.

On the light entertainment front, one of the BBC's strongest programming aspects, the Corporation is not only reviving many of its big hits like 'The Black And White Minstrel Show," "Billy Cotton Show," Michael Bentine series, Harry Worth half-hours, Brian Rix shows etc., but is now on the hunt for "big time" international names of the calibre of a Nat Cole or a Sammy Davis, Jr.

Controversial "That Was The Week That Was is reslotted in its Saturday night berth having been re-barbed (and remolded to some extent) and light entertainment topper Tom Sloan is prepping another l.e. show "out of the same school of thought" — hough not satire—involving live actors and one actress under the title of "The Company Of Six."

"The Good Old Days," a long-running costume song-and-dance show, is to get the big treatment and will be developed into a bigger offering and slotted in midweek prime time.

The six episode "Comedy Playhouse" series — which provided BBC with its biggest-ever hi "Steptoe And Son" - is to be stepped up to a 13-segment series with different comedy writers contributing shows, each of which will be a pilot. One of the few aspects that has not undergone any hypoing on BBC-1, is the use of U.S. material. This is principally because the "strong buys" BBC in currently running — "Lucy," "Kildaire," "De fenders," "Dick Powell Theatre," Dick Van Dyke and "Wells Fargo" — are holding key berths throughout the week already and, short of stepping up its (self imposed) quota of foreign material, BBC-TV can hardly do more in this direction.

Significant scheduling changes being brought about in the fall include the shift of the primetime newcast from 9:15 pm, to 9 p.m. where it will directly oppose Independent Television News on the commercial channel. Move allows program controller Hood to mount three big programs after the newscast whereas in the past he has been confined to two. And In view of the fact BBC treats the night newsbreak as a "watershed" which divides "family time" from "adult time," Hood is lengthening the latter's crack of the whip. Overall. the BBC's fall line up, with its new "Think Big" emphasis especially designed to capture the peak time ratings, smacks of a drive never before known from the web. The purse strings have been opened wider, the spirit of battle is running high. But with the commercial boys well aware tint "the gloves are off," only the fall battlefield will determine the vital issue, whether BBC-1 with its new look productions, has the requisite staying power.