This new TV system has connections far beyond the Internet 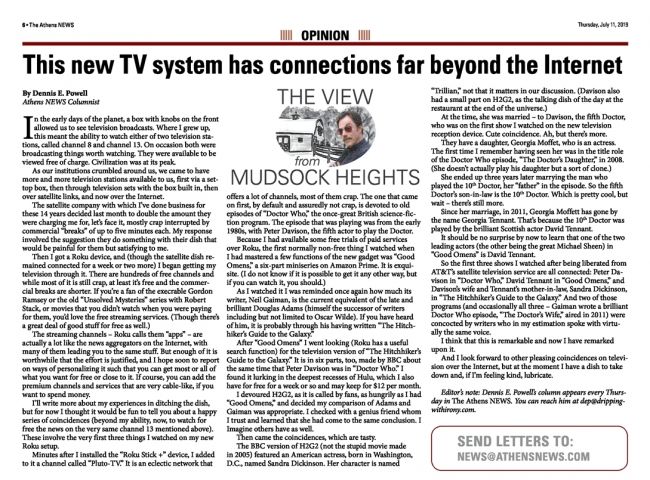 In the early days of the planet, a box with knobs on the front allowed us to see television broadcasts. Where I grew up, this meant the ability to watch either of two television stations, called channel 8 and channel 13. On occasion both were broadcasting things worth watching. They were available to be viewed free of charge. Civilization was at its peak.

As our institutions crumbled around us, we came to have more and more television stations available to us, first via a set-top box, then through television sets with the box built in, then over satellite links, and now over the Internet.

The satellite company with which I've done business for these 14 years decided last month to double the amount they were charging me for, let's face it, mostly crap interrupted by commercial "breaks" of up to five minutes each. My response involved the suggestion they do something with their dish that would be painful for them but satisfying to me.

Then I got a Roku device, and (though the satellite dish remained connected for a week or two more) I began getting my television through it. There are hundreds of free channels and while most of it is still crap, at least it's free and the commercial breaks are shorter. If you're a fan of the execrable Gordon Ramsey or the old "Unsolved Mysteries" series with Robert Stack, or movies that you didn't watch when you were paying for them, you'd love the free streaming services. (Though there's a great deal of good stuff for free as well.)

The streaming channels – Roku calls them "apps" – are actually a lot like the news aggregators on the Internet, with many of them leading you to the same stuff. But enough of it is worthwhile that the effort is justified, and I hope soon to report on ways of personalizing it such that you can get most or all of what you want for free or close to it. If course, you can add the premium channels and services that are very cable-like, if you want to spend money.

I'll write more about my experiences in ditching the dish, but for now I thought it would be fun to tell you about a happy series of coincidences (beyond my ability, now, to watch for free the news on the very same channel 13 mentioned above). These involve the very first three things I watched on my new Roku setup.

Minutes after I installed the "Roku Stick +" device, I added to it a channel called "Pluto-TV." It is an eclectic network that offers a lot of channels, most of them crap. The one that came on first, by default and assuredly not crap, is devoted to old episodes of "Doctor Who," the once-great British science-fiction program. The episode that was playing was from the early 1980s, with Peter Davison, the fifth actor to play the Doctor.

Because I had available some free trials of paid services over Roku, the first normally non-free thing I watched when I had mastered a few functions of the new gadget was "Good Omens," a six-part miniseries on Amazon Prime. It is exquisite. (I do not know if it is possible to get it any other way, but if you can watch it, you should.)

As I watched it I was reminded once again how much its writer, Neil Gaiman, is the current equivalent of the late and brilliant Douglas Adams (himself the successor of writers including but not limited to Oscar Wilde). If you have heard of him, it is probably through his having written "The Hitch-hiker's Guide to the Galaxy."

After "Good Omens" I went looking (Roku has a useful search function) for the television version of "The Hitchhiker's Guide to the Galaxy." It is in six parts, too, made by BBC about the same time that Peter Davison was in "Doctor Who." I found it lurking in the deepest recesses of Hulu, which I also have for free for a week or so and may keep for $12 per month.

I devoured H2G2, as it is called by fans, as hungrily as I had "Good Omens," and decided my comparison of Adams and Gaiman was appropriate. I checked with a genius friend whom I trust and learned that she had come to the same conclusion. I Imagine others have as well.

Then came the coincidences, which are tasty.

The BBC version of H2G2 (not the stupid movie made in 2005) featured an American actress, born in Washington, D.C., named Sandra Dickinson. Her character is named "Trillian," not that it matters in our discussion. (Davison also had a small part on H2G2, as the talking dish of the day at the restaurant at the end of the universe.)

At the time, she was married – to Davison, the fifth Doctor, who was on the first show I watched on the new television reception device. Cute coincidence. Ah, but there's more.

They have a daughter, Georgia Moffet, who is an actress. The first time I remember having seen her was in the title role of the Doctor Who episode, "The Doctor's Daughter," in 2008. (She doesn't actually play his daughter but a sort of clone.)

She ended up three years later marrying the man who played the 10th Doctor, her "father" in the episode. So the fifth Doctor's son-in-law is the 10th Doctor. Which is pretty cool, but wait – there's still more.

Since her marriage, in 2011, Georgia Moffett has gone by the name Georgia Tennant. That's because the 10th Doctor was played by the brilliant Scottish actor David Tennant.

It should be no surprise by now to learn that one of the two leading actors (the other being the great Michael Sheen) in "Good Omens" is David Tennant.

So the first three shows I watched after being liberated from AT&T's satellite television service are all connected: Peter Davison in "Doctor Who," David Tennant in "Good Omens," and Davison's wife and Tennant's mother-in-law, Sandra Dickinson, in "The Hitchhiker's Guide to the Galaxy." And two of those programs (and occasionally all three – Gaiman wrote a brilliant Doctor Who episode, "The Doctor's Wife," aired in 2011) were concocted by writers who in my estimation spoke with virtually the same voice.

I think that this is remarkable and now I have remarked upon it.

And I look forward to other pleasing coincidences on television over the Internet, but at the moment I have a dish to take down and, if I'm feeling kind, lubricate.

Editor's note: Dennis E. Powell's column appears every Thursday in The Athens NEWS. You can reach him at dep@dripping-withirony.com.