This programme's in a bad way, Doctor 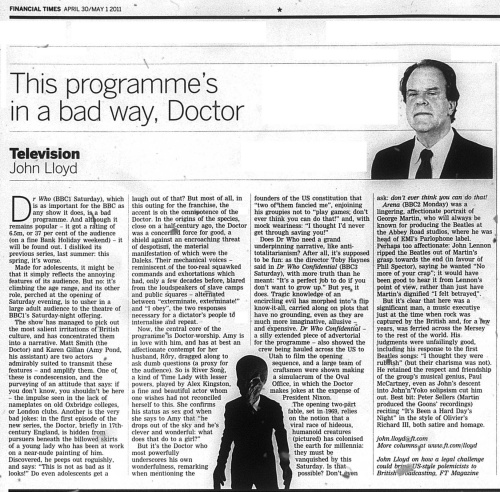 Dr Who (BBC1 Saturday), which is as important for the BBC as any show it does, is a bad programme. And although it remains popular - it got a rating of 6.5m, or 37 per cent of the audience (on a fine Bank Holiday weekend) - it will be found out. I disliked its previous series, last summer: this spring, it's worse.

Made for adolescents, it might be that it simply reflects the annoying features of its audience. But no: it's climbing the age range, and its other role, perched at the opening of Saturday evening, is to usher in a large adult audience to the theatre of BBC1's Saturday-night offering.

The show has managed to pick out the most salient irritations of British culture, and has concentrated them into a narrative. Matt Smith (the Doctor) and Karen Gillan (Amy Pond, his assistant) are two actors admirably suited to transmit these features - and amplify them. One of these is condescension, and the purveying of an attitude that says: if you don't know, you shouldn't be here - the impulse seen in the lack of nameplates on old Oxbridge colleges, or London clubs. Another is the very bad jokes: in the first episode of the new series, the Doctor, briefly in 17th-century England, is hidden from pursuers beneath the billowed skirts of a young lady who has been at work on a near-nude painting of him. Discovered, he peeps out roguishly, and says: "This is not as bad as it looks!" Do even adolescents get a laugh out of that? But most of all, in this outing for the franchise, the accent is on the omnipotence of the Doctor. In the origins of the species, close on a half-century ago, the Doctor was a concerned force for good, a shield against an encroaching threat of despotism, the material manifestation of which were the Daleks. Their mechanical voices - reminiscent of the too-real squawked commands and exhortations which had, only a few decades before, blared from the loudspeakers of slave camps and public squares - alternated between "exterminate, exterminate!" and "I obey", the two responses necessary for a dictator's people to internalise and repeat.

Now, the central core of the programme is Doctor-worship. Amy is in love with him, and has at best an affectionate contempt for her husband, Rory, dragged along to ask dumb questions (a proxy for the audience). So is River Song, a kind of Time Lady with lesser powers, played by Alex Kingston, a fine and beautiful actor whom one wishes had not reconciled herself to this. She confirms his status as sex god when she says to Amy that "he drops out of the sky and he's clever and wonderful: what does that do to a girl?"

But it's the Doctor who most powerfully underscores his own wonderfulness, remarking when mentioning the founders of the US constitution that "two of them fancied me", enjoining his groupies not to "play games; don't ever think you can do that!" and, with mock weariness: "I thought I'd never get through saving you!"

Does Dr Who need a grand underpinning narrative, like anti-totalitarianism? After all, it's supposed to be fun: as the director Toby Haynes said in Dr Who Confidential (BBC3 Saturday), with more truth than he meant: "It's a perfect job to do if you don't want to grow up." But yes, it does. Tragic knowledge of an encircling evil has morphed into a flip know-it-all, carried along on plots that have no grounding, even as they are much more imaginative, allusive - and ex-pensive. Dr Who Confidential - a silly extended piece of advertorial for the programme - also showed the crew being hauled across the US to Utah to film the opening sequence, and a large team of craftsmen were shown making a simulacrum of the Oval Office, in which the Doctor makes jokes at the expense of President Nixon.

The opening two-part fable, set in 1969, relies on the notion that a viral race of hideous, humanoid creatures (pictured) has colonised the earth for millennia: they must be vanquished by this Saturday. Is that possible? Don't even ask: don't ever think you can do that!