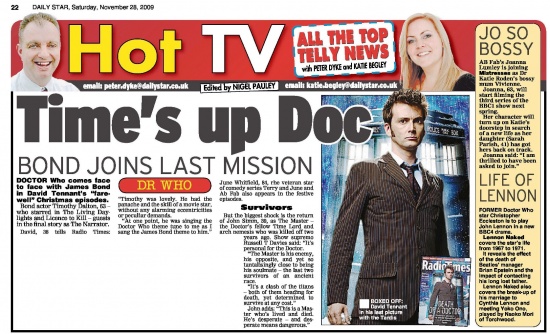 DOCTOR Who comes face to face with James Bond in David Tennant's "farewell" Christmas episodes. Bond actor Timothy Dalton, 63 who starred in The Living Daylights and Licence to Kill - guests in the final story as The Narrator. David, 38 tells Radio Times: "Timothy was lovely. He had the panache and the skill of a movie star, without any alarming eccentricities or peculiar demands.

"At one point, he was singing the Doctor Who theme tune to me as I sang the James Bond theme to him."

But the biggest shock is the return of John Simm, 39, as The Master — the Doctor's fellow Time Lord and arch nemesis who was killed off two years ago. Show supremo Russell T Davies said: "It's personal for the Doctor.

"The Master is his enemy, his opposite, and yet so tantalisingly close to being his soulmate — the last two survivors of an ancient race.

"It's a clash of the titans — both of them heading for death, yet determined to survive at any cost."

John adds: "This is a Master who's lived and died. He's desperate — and desperate means dangerous."

Caption: BOXED OFF: David Tennant in his last picture with the Tardis

FORMER Doctor Who star Christopher Eccleston is to play John Lennon in a new BBC4 drama.

Lennon Naked covers the star's life from 1967 to 1971. It reveals the effect of the death of Beatles' manager Brian Epstein and the impact of contacting his long lost father. Lennon Naked also covers the break-up of his marriage to Cynthia Lennon and meeting Yoko Ono, played by Naoko Mori of Torchwood.